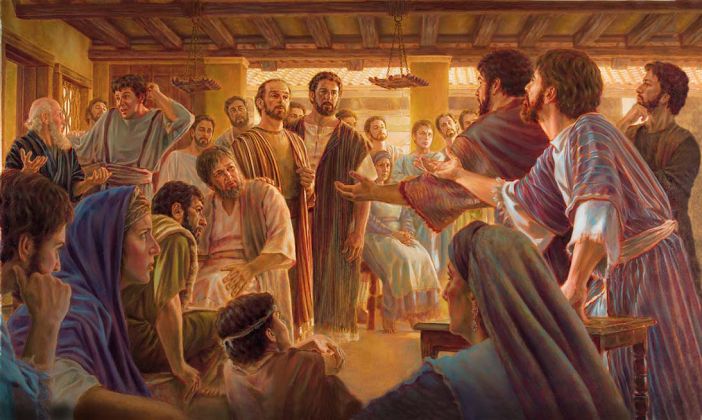 The only two explicit references in the entire New Testament to the terms “bind and loose” appear in Matthew (but see also John 20:23). The first reference appears when Peter identifies Jesus as the Christ, the Son of the living God (Matthew 16:16). As the first among equals, Simon Peter is then blessed, given the keys of the kingdom of heaven as well as the authority to “bind and loose” (Matthew 16:19). The second reference appears as part of the community or Church discourse where, in the context of Church discipline, all the apostles are given the authority to “bind and loose” (Matthew 18:18). Since these terms appear nowhere else in the New Testament, how would Peter and the other apostles have understood this?

Jews living at that time understood the terms “bind and loose” in two ways. According to Edersheim (cited in Constable 2017:284; cf. Wiersbe 2007:49), these “two powers—the legislative [i.e., binding and loosing] and judicial [i.e., remitting and retaining]—which belonged to the Rabbinic office, Christ now transferred, and that not in their pretension, but in their reality, to His Apostles.”

In a judicial sense, to “bind” means “to punish” and to “loose” means “to release from punishment” (Fruchtenbaum 2005:9).

It is important to understand the unique role given by Christ to the apostles to “bind and loose”. Christ gave Peter and the other apostles the authority to legislatively bind and loose (to permit or to forbid). Under the guidance and inspiration of the Holy Spirit, the apostles exercised this authority in the epistles, sermons and prophecy recorded in the New Testament. Only documents that had the approval or ‘backing’ of the apostles were included in the New Testament. The result of the inspired New Testament writings is that we have the Law of Christ – the legislative foundation for believers in Christ living under the New Covenant. Don’t dare adding or subtracting from it (cf. Revelation 22:18-19).

The prime example of legislative binding and loosing is found in Acts 15, where the apostles, under the guidance of the Holy Spirit, decide what to permit and what to forbid regarding Gentile believers in Christ. Another example: when he emphasises that he is an apostle of Lord Jesus Christ, Paul is reminding his readers that whatever he is forbidding on earth will have been forbidden in heaven, and whatever he was permitting on earth will have been permitted in heaven.

While the apostles of Christ were still on earth, they also decided judicial matters in the Church, based on the Old Testament, Christ’s teachings, the guidance of the Holy Spirit and whichever New Testament documents had already been written. A prime example of judicial binding and loosing is found in Acts 5, when Peter, using his apostolic authority, “binds” (meaning: punishes) Ananias and Sapphira because they lied to the Holy Spirit. Paul judicially “binds” in 1 Corinthians 5:1-13 and he judicially “looses” in 2 Corinthians 2:4-8.

Once the last apostle (the apostle John) passed away, and with the New Testament canon closed, the legislative foundation was laid. The authority to bind and loose was given uniquely and solely to the apostles. Having been built on the foundation of the apostles and prophets, Jesus Christ himself being the chief cornerstone, the foundation for the Church has been laid, once and for all (Ephesians 2:19-22) — you lay a foundation only once, don’t you? There is no Scriptural ground whatsoever to argue that this apostolic authority has been passed on to others subsequently. Although many parade themselves as such, there are no apostles today — the last apostle (John) passed away about 1 915 years ago.

Given that the legislative foundation has been laid, how should local churches decide judicial matters? Church discipline is clearly called for (Matthew 18:16-20) and, in this area, to bind would mean “to excommunicate” and to loose would mean “not to excommunicate” (Fruchtenbaum 2005:10). Local churches must take care to decide judicial matters in accordance with the New Testament and not with man-made laws or rules not found in Scripture.

The only two explicit New Testament references to “bind and loose” appear in Matthew 16:19 and 18:18. It is only from these contexts that one can start to investigate what the terms meant for the Jews living at that time. From such a Jewish frame of reference, one can conclude that “the confession of Peter and the response of Yeshua [Jesus] set the stage for the establishment of the Church and the recording of New Testament Scriptures through apostolic authority” (Fruchtenbaum 2005:10).