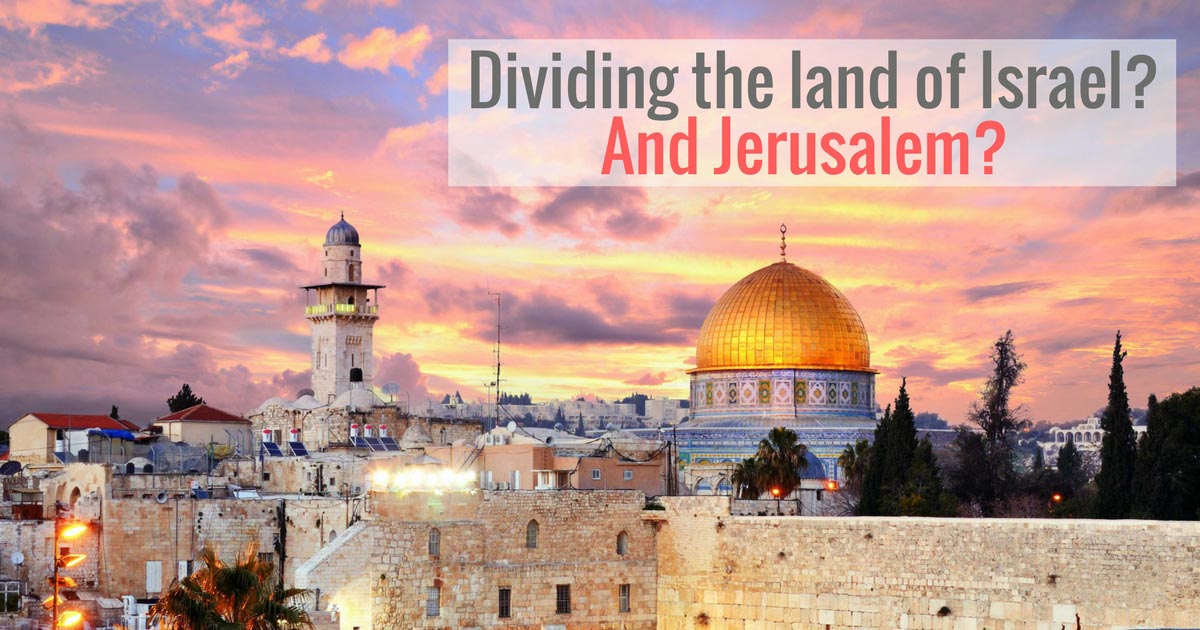 Dividing the land of Israel? And Jerusalem?

Two end-time prophecies are becoming very relevant, even today. In both cases these literal prophecies will be literally (or directly) fulfilled towards the end of the seven-year Tribulation Period, or just thereafter. But in both cases, it appears that the scene is slowly but surely being set for its fulfilment. In the first instance, the prophecy refers to judgment because of certain actions towards the land of Israel. In the second, it refers to the capital city of Israel, namely Jerusalem.

Joel 3:1-3 states the following: For behold, in those days and at that time, when I restore the fortunes of Judah and Jerusalem, I will gather all the nations and bring them down to the Valley of Jehoshaphat. And I will enter into judgement with them there, on behalf of my people and my heritage Israel, because they have scattered them among the nations and have divided up my land, and have cast lots for my people, and have traded a boy for a prostitute, and have sold a girl for wine and have drunk it.

The above judgment is the same as depicted in the sheep and goat judgment (Matthew 25:31-46). Shortly after the second coming of Christ, He will gather all the nations and bring them down to the Valley of Jehoshaphat and enter into judgement with them. Among the atrocities described — hate towards Jewish people will even result in trading Jewish boys for prostitutes and Jewish girls for wine — one of the reasons for the judgement is because the nations ‘have divided up my land’. The Judge is none other than the Lord Jesus Christ, the King of the Jews, who as God but also as Son of Abraham refers to this as ‘my land’. While this judgement will only take place shortly after Christ’s second coming, today we already see continued and relentless pressure on Israel to divide its land, under the misguided refrain of “land for peace”.

Why is Satan deceiving the nations (cf. Revelation 20:3) to continue with this misguided “land for peace” policy? Background may help: after the 70 nations rebelled at the tower of Babel (Genesis 10-11), God made a new start with Abraham, creating a new nation through his descendants Isaac, Jacob (also called Israel) and Jacob’s twelve sons. Israel is not an end in itself, but the chosen nation will be used to bring glory to God. One purpose of Israel is to be a blessing to the other nations of the world. As the chosen nation, as a kingdom of priests, Israel is to intercede as priests between the holy God and the wayward nations of the world. The greatest blessing is that God the Son took on human nature by becoming a Jew and, as a Jew, the Messiah is the Lamb of God who takes away the sins of the world. But there are still many unconditional prophecies regarding Israel and the nations that are yet unfulfilled. When the Messiah returns to set up the Messianic kingdom, He will see to it that God’s purposes for Israel and the nations are fulfilled. Today, during the inter-advent period, Christ is building an international body of believers in Christ — but the Church is also not an end in itself, but brings glory to God by making disciples out of all the nations. But at some stage in the future, the Church will be raptured and God’s plans for Israel and the (70?) nations will continue further.

Israel today is neither perfect nor inhabited by many believers (not yet). This has, however, been the case during the past four thousand years. Throughout this time, God’s unconditional promise to Abraham stands: ‘I will bless those who bless you, and him who dishonours you I will curse, and in you all the families of the earth shall be blessed’ (Genesis 12:3). While again stressing that Israel today is not perfect, nations should tailor their foreign policies on the principle of Genesis 12:3. But instead of blessing Israel, we see the exact opposite today: Satan is deceiving the nations to put pressure on Israel to divide its land and antisemitism (more precisely: anti-Jewishness) is again increasing.

A second end-time prophecy that is becoming more and more relevant today concerns Jerusalem. The earliest mention of this city is in Genesis 14, where Melchizedek acted as a king-priest in a place signified as a city of righteousness, peace, worship, sacrifice and joy. Abraham went to Mount Moriah to offer Isaac (cf. Genesis 22), which is where Jerusalem is today. In Deuteronomy 12:5-6, God said through Moses to the Israelites that you shall seek the place that the LORD your God will choose out of all your tribes to put his name and make his habitation there. There you shall go. And many years later, God chose the temple to be in the city of Jerusalem: In this house, and in Jerusalem, which I have chosen out of all the tribes of Israel, I will put my Name forever (2 Kings 21:7; cf. also 1 Kings 11:36; 2 Chronicles 33:4).

But the prophecy that is the focus today is stated in Zechariah 12:1-3 (and which is part of a pericope of 12:1-9): The oracle of the word of the LORD concerning Israel: Thus declares the LORD, who stretched out the heavens and founded the earth and formed the spirit of man within him: “Behold, I am about to make Jerusalem a cup of staggering to all the surrounding peoples. The siege of Jerusalem will also be against Judah. On that day I will make Jerusalem a heavy stone for all the peoples. All who lift it will surely hurt themselves. And all the nations of the earth will gather against it.

In the introduction of the prophecy of Zechariah 12:1-9, God the Creator of the heavens, the earth and all people, said that He is about to make Jerusalem a cup of staggering to all the surrounding peoples, a heavy stone for all peoples. Moreover, all the nations of the earth will gather against Jerusalem. This prophecy has never been fulfilled yet. It will be fulfilled near the end of the Tribulation Period, when all the nations will gather against Israel and Jerusalem in the battle of Armageddon. While this prophecy is yet future, even today we can see the nations of the world gathering against Israel, even denying that Jerusalem is the city of the great King (Psalm 48:2; Matthew 5:35). But this is utter foolishness, for God has put His Name in Jerusalem forever.

We don’t know when the rapture or Christ’s return to the earth will occur. But what appears to be happening now is that the scene is being set for the end-time prophecies to be fulfilled as predicted. After his second coming to the earth, the Lord Jesus Christ will judge the nations because they have divided up the land of Israel — and yet even today we see how almost all nations pressure Israel to divide its land, as if this will bring peace. Even today Jerusalem is becoming a cup of trembling and a heavy stone to all nations — a situation that will only intensify until the prophecies of Zechariah 12:1-3 are fulfilled. Pray for the peace of Jerusalem. Pray that the kingdom will come — as it will when the Prince of Peace returns to the city that bears His Name.