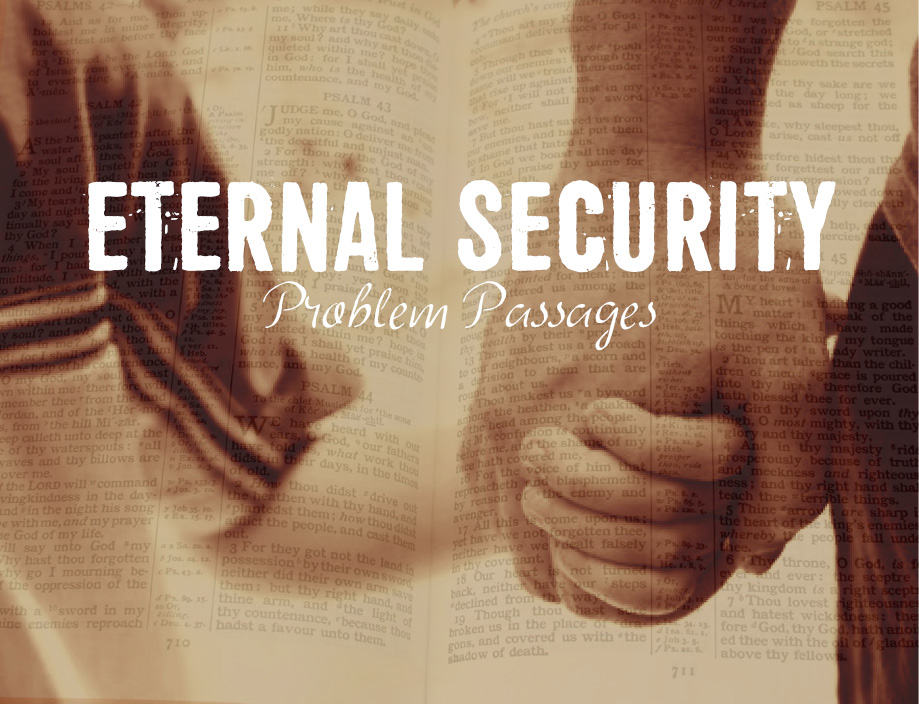 In some cases, the Biblical text is not speaking about individual believers and their salvation, but rather speaks about (1) physical life and physical death under the Law of Moses, (2) about family forgiveness instead of salvation forgiveness or (3) about Israel as a nation. Under the Law of Moses (the Mosaic covenant), the enjoyment of physical life and the enjoyment of a long life was based on keeping the Law. For example, Moses lived most of his life in conformity to God’s righteous standards. But one day when he disobeyed God, he was punished with physical death outside of the Promised Land. Did Moses lose his salvation? Of course not. Salvation is always by grace through faith plus nothing. Salvation is never by means of works. Under the Law of Moses, certain acts were punishable with physical death, but this does not necessarily mean that person lost his or her salvation.

Bible texts about unsaved people are sometimes incorrectly applied to believers with the result that wrong inferences are made. For example, the end of false apostles will be according to their works (2 Corinthians 11:13-15). Such false apostles were never saved to begin with and they will perish in the lake of fire. But this text does not teach that believers will lose their salvation. False teachers will come to you in sheep’s clothing, but inwardly they are ravening wolves (Matthew 7:15). Again, these wolves were never sheep in the first place (they are unsaved), so their end should not be applied to Christ’s sheep. The same can be said for false teachers who remain lost (cf. 1 Timothy 4:1-2), but this does not mean believers can lose their salvation.

Passages Concerning the Fruit of Salvation

Another area of passages which people sometimes use to try and show that it is possible to lose one’s salvation, are texts which speak about evidences of salvation. For example, in John 8:31, Jesus said to “those Jews that had believed them, If you abide in My word, then you are truly My disciples”. This verse deals with discipleship. One is saved by faith but becomes a disciple by obedience. These Jews had belief, so they had personal salvation, but if they wanted to become true, fully committed disciples, they needed to keep Christ’s commandments. Another example is John 15:6 where Jesus is not dealing with the loss of salvation, but with fruit-bearing. Those who bear fruit will be rewarded; those who do not bear fruit will not be rewarded.

Concerning the ‘If’ Clauses In the Book of Hebrews

Some people use the ‘if’ clauses of Hebrews (2:3; 3:6, 14; 6:3; 10:26, 38) to teach that it is possible that believers could lose their salvation. But these ‘if’ clauses have to do with pressing onto maturity and dealing with divine discipline of believers, not about losing one’s salvation. Failure to attain spiritual maturity and failure to heed these warnings in Hebrews will not result in spiritual death, but could result in physical death.

Church age believers will appear before the bema seat of Christ. Since there is no condemnation for those who are in Christ (Romans 8:1), the issue before the Judgement seat of Christ is not salvation, but rewards. The works of some believers shall be burned and he (or she) shall suffer loss; but he (or she) himself shall be saved; yet as through fire (1 Corinthians 3:15). Other works will be rewarded. This very passage which some use to teach that one can lose one’s salvation actually teaches the exact opposite. Some works of some believers will be burned and they will lose rewards, but not their salvation.

Once a believer has been saved by God’s grace through faith (plus nothing), you cannot lose your salvation, for we are kept by the power of God.

If you would like to read more about this important topic, we suggest you read the original article and source of this summary, Eternal Security, written by Dr. Arnold Fruchtenbaum.