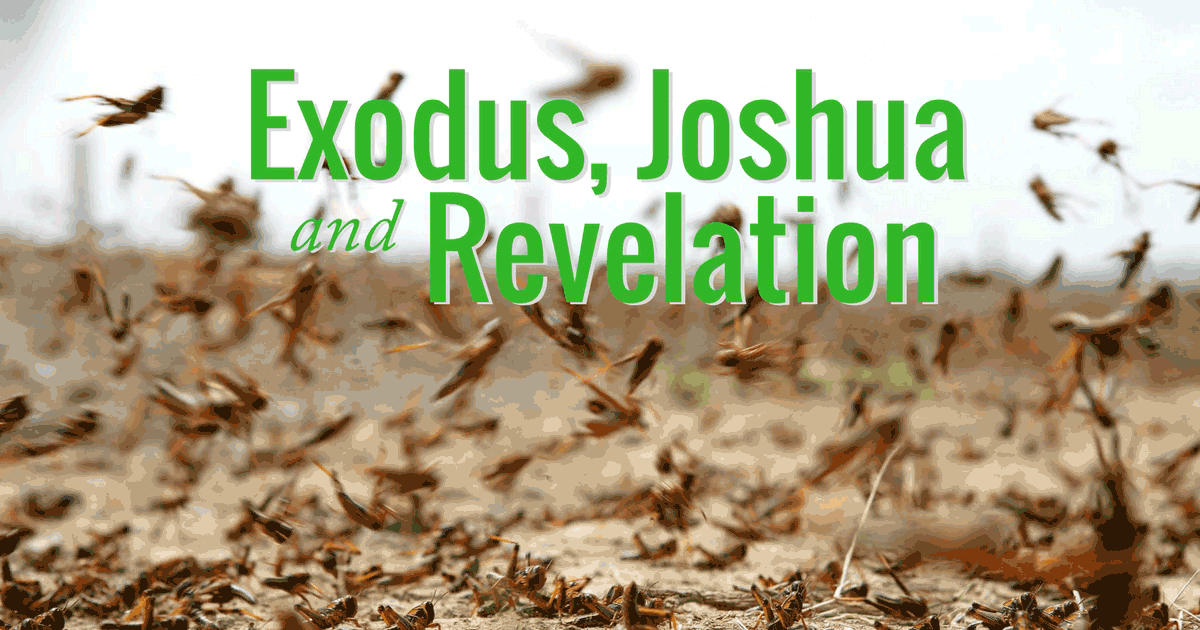 God told Abraham that his descendants (through Jacob) would be strangers in a foreign land and be afflicted (Gen 15:13). This affliction and bondage came about when a new Pharaoh arose who did not know Joseph (Ex 1:8). The book of Exodus shows how God miraculously and wonderfully redeemed the descendants of Jacob from Egyptian bondage. God called his national son, i.e. Israel, out of the affliction and bondage of Egypt (cf. Ex 4:22; Hos 11:1). Shortly thereafter, God entered in the Mosaic covenant with Israel at Sinai, taught Israel to worship God, and God lead the way in a pillar of cloud by day and a pillar of fire by night (Ex 13:21-22). While Egypt wanted to enslave and dominate Israel, the book of Exodus documents the birth of the nation of Israel — and moving towards the Promised Land.

God told Pharaoh many times: “Thus says Jehovah, the God of Israel, Let my people go” (Ex 5:1), but instead Pharaoh made it more difficult for the Jews. Through the ten plagues, God executed judgments ‘against all the gods of Egypt’ (Ex 12:12). These divine judgments show that God is the great I AM and reveal how Pharaoh’s grip over the descendants of Jacob was loosened, until he eventually let the Hebrews go. In Revelation 5, God gives the seven-sealed scroll to the One who is worthy to open it, i.e. Christ receives the title deed to the earth — and when it has been opened and activated, not only will Christ’s enemies have been made his footstool, but the Messianic kingdom will be established. As Woods (2016:172) correctly notes, the rivers that turned into blood in the first plague resemble the third bowl judgement (Ex 7:19-21; Rev 16:4-7); the sores of the sixth plague resemble the first bowl judgment (Ex 9:8-12; Rev 16:1-2); the hail of the seventh plague resembles the seventh bowl judgment (Ex 9:22-26; Rev 16:17-21); and the darkness of the ninth plague resembles the fifth bowl judgment (Ex 10:21-23; Rev 16:10-11). The judgements in Revelation show that God is the great I AM and reveal how Satan’s grip over the earth will be loosened and how the god of this world, the Antichrist and all idols will be defeated. When the God of Israel returns to the earth, He will gather his elect (which in the context of Matthew’s Olivet discourse refers to the Jewish remnant) from all over the world and bring them to the land of Israel (cf. Mat 24:31).

Pharaoh is therefore a type of the Antichrist and of Satan. Pharaoh wanted to keep Israel in captivity just as post the fall of humankind Satan is keeping this world in bondage under his authority (cf. Luke 4:5-8; 2 Cor 4:4; Eph 2:2; 1 John 5:19). The redemption of Israel out of Egypt is therefore a picture of how God will transfer authority over the whole earth to his Messiah. In Revelation 11:15, it is clear that ‘the kingdom of this world has become the kingdom of our Lord, and of His Christ; and He will reign forever and ever’. But just as was the case with Pharaoh, so too it will be with Satan: authority will be relinquished only because of God’s judgments.

‘Joshua’, whose name means ‘God saves’, is as a type of ‘Yeshua’ (Jesus), whose name likewise means ‘God saves’. Joshua lead the Israelites into victory by capturing (most of) the Promised Land — but Yeshua will not only save His people from annihilation by Satan, but He will also lead them into all of the Promised Land (cf. Gen 15:18-21). Joshua had a seven-year campaign to take the land — 45 years (Num 14:30) less 38 years spent in the wilderness (Deut 2:14) — and Yeshua will similarly take possession of the earth after the seven-year Tribulation Period.

Three kings were defeated east of the river Jordan (Ex 17:8-16; Num 21:21-35; Deut 2:30-37), but seven nations/kings remained to be defeated by Joshua. In Joshua, the enemies of God confederated under the king of Jerusalem, a leader called Adonai-Zedek, meaning the ‘lord of righteousness’ (Jos 10:1-14). Something similar awaits the Tribulation Period: originally there will be ten kings, but the Antichrist will defeat three of them, becoming the eighth ruler himself. Then the enemies of God will confederate under the Antichrist, someone who demands to be worshipped (Rev 13:1-18) – but Christ will defeat them all (Dan 7:8, 24; Rev 12:3; 13:1; 17:3, 7).

Joshua sent two spies into the land (Jos 2:1-24), but before Christ returns, two witnesses will be active for 3,5 years in Jerusalem (Rev 11:1-12). In the book of Joshua, Israel and the ark of the Lord silently circled Jericho six days with seven priests blowing seven trumpets. On the 7th day, they circled the city seven times and at the 7th time, when the priests had blown the trumpets, Israel shouted and then destroyed the city (Jos 6:1-27). In Revelation, Christ opens six seal judgements but the 7th seal heralds the seven trumpet judgements, blown by seven angels, which in turn leads to seven bowl judgements, and, eventually, the capital city of the Antichrist, Babylon, will be destroyed (Rev 6:1-10:11; 15:1-16:21; 17-18).

It is profitable to study the typological connections between the books of Exodus, Joshua and Revelation. Christ will return to the earth, save His people, enter in the New Covenant with Israel and then victoriously lead the believing remnant into the land of Israel. But Christ will do so much more, not only freeing the earth from the bondage of Satan (cf. Rev 20:2-3), but also establishing the Messianic kingdom to rule over all the earth. We don’t know when it will happen, but what Revelation 11:15 states will surely come to pass at some stage, when loud voices in heaven will say, “The kingdoms of this world have become the kingdoms of our Lord and of His Christ, and He shall reign forever and ever!”

Woods, A.M., 2016, The Coming Kingdom: What is the Kingdom and How is Kingdom Now Theology Changing the focus of the Church?, Grace Gospel Press, Duluth.

← Read The Doctrine of the Nations read Why MUST Christ Reign On the Earth Before the Eternal Order? →