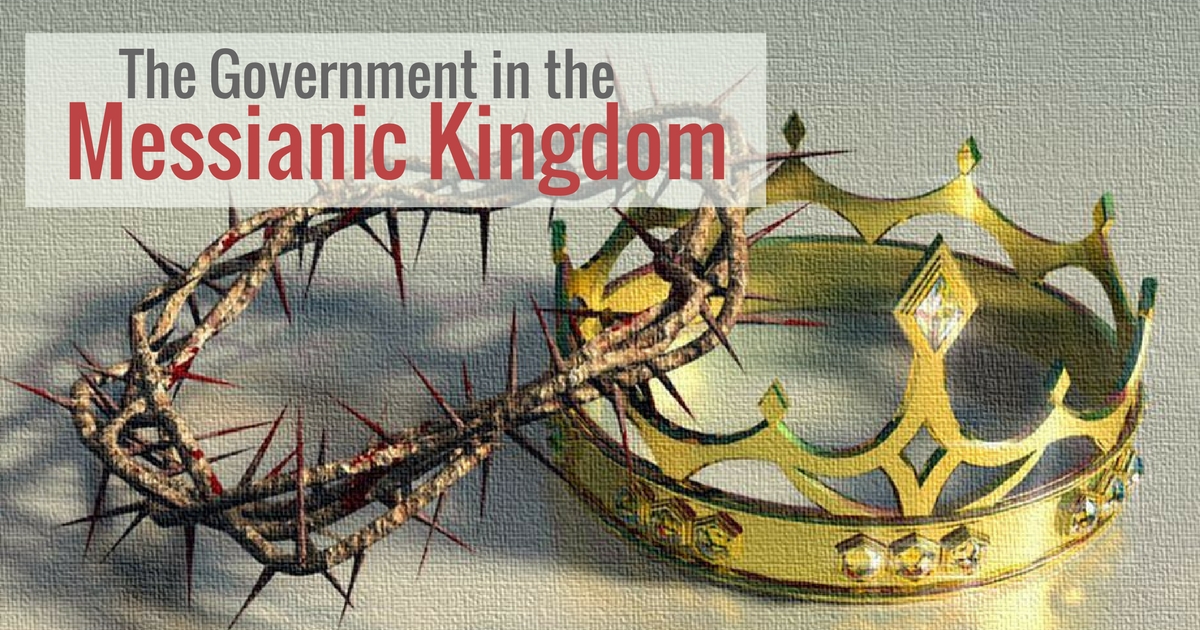 The Government in the Messianic Kingdom

During December, many focus on the first part of Isaiah 9:6 — ‘For to us a child is born, to us a son is given’ — but this verse continues to say that ‘the government shall be upon his shoulder’. Something very similar is written in Luke 1:32-33: ‘He will be great and will be called the Son of the Most High. And the Lord God will give to him the throne of his father David, and he will reign over the house of Jacob forever, and of his kingdom there will be no end’. But we do not yet see everything in subjection to Him (Hebrews 2:8). If this government is going to be on the shoulder of the King of kings and LORD of lords (cf. 1 Timothy 6:15; Revelation 17:14; 19:16), how will the government of the Messianic kingdom be? If everything is going to be in subjection to Him, will the form of the Messianic kingdom be democratic, republican or a monarchy? Will there be different branches of government, will Israel rule over other nations and, if so, what does this really mean? As we move into a new year, it behoves us to look ahead to Christ who is not a baby anymore, but to whom has been given all authority in heaven and on earth and who is going to return to rule from Jerusalem over Israel and all the nations.

As is clear from the afore-mentioned verses, the form of the Messianic kingdom is going to be that of a monarchy. It is not going to be that of a democracy in the land of Laodicea where the majority opinion of people, each having a fallen human nature, decide which party is going to rule. It is also not going to be quite like a republic where various branches of government — judicial, legislative, or executive — are usually kept separate in honest recognition of the fact that fallen humankind with a fallen nature need checks and balances. Instead, the form of the Messianic kingdom will be monarchial because all functions of government (and of worship) will be centered in the perfect God-man, the Lord Jesus Christ: ‘For the LORD is our judge; the LORD is our lawgiver; the LORD is our king; he will save us (Isaiah 33:22, my underlining). The Messiah shall not only judge between the nations, but out of Zion shall go forth the law, and He shall rule as King on the throne of David over his kingdom and of the increase of his government and of peace there will be no end (Isaiah 2:3-4; 9:7). This does not mean the King is going to do everything (although He is able to because He is omnipotent), but rather that He will be the infinitely wise and good directing head and final authority of all government, securing not only peace and righteousness, but also holiness, morality, beauty, justice, mercy, tenderness and truth. Only those who have believed the gospel of Christ, who have been born again, born of water and Spirit, can enter into this kingdom (cf. John 3:3, 5).

Organization Of The Messianic Government

In Israel, there will be princes. The first is going to be the resurrected David, who will be a shepherd in Israel and who will also reign, but always under the Chief Shepherd and King (Jeremiah 30:9; Ezekiel 34:23-24; 37:24-25). Another prince in Israel will be the resurrected Zerubbabel, as Haggai 2:20-23 intimates. In addition to David and Zerubbabel, there will also be other princes in Israel (Isaiah 32:1; Ezekiel 45:8). This relates to executive authority.

There will also be lesser authorities in the Messianic kingdom, such as judges and counsellors in Israel (Isaiah 1:26; Zechariah 3:7) or those who have authority over ten or five cities (Matthew 25:14-30; Luke 19:12-28).

If the above is going to be the general outline of the government in Israel during the millennium, how will it be in the other nations on earth at that time? Some Church and Tribulation saints will receive authority over the nations (Revelation 2:26-27; 20:4b). But within Gentile nations there will also be kings (Psalm 72:10-11). Along with other Gentiles, these kings will also be required to travel to Jerusalem to worship the King, the LORD of hosts, for the Feast of Tabernacles (Zechariah 14:16-19).

Subject Of The Messianic Kingdom

Believers who (physically) survive the Tribulation period will enter the Messianic kingdom with their mortal bodies, be able to procreate and therefore re-populate the earth during the millennium. Some of these children will not become believers, and these unbelievers will die at age 100 (Isaiah 65:20). During the millennium, Christ and those who have been given authority will rule with a rod of iron. All believers who have died prior to Christ’s second coming to the earth, or who were raptured while still alive, will return to the earth with Christ, having received their glorified bodies. These believers with their glorified bodies will also be subjects of the King.

Believers have much to look forward to. Contrary to false Platonic and even Gnostic views about heaven and earth, when we receive our glorified bodies, we are not going to float aimlessly on some wispy cloud, doing little. Instead, under the King of kings and LORD of lords, we are going to be actively involved in the Messianic kingdom, here, on a changed earth. The sufferings of this present time are not worthy to be compared with the glory which shall be revealed in us (cf. Romans 8:18). For as it is written, ‘eye has not seen, nor ear heard, nor have entered into the heart of man the things which God has prepared for those who love Him’ (1 Corinthian 2:9).

← Read Dividing the land of Israel? And Jerusalem? read Prophetic Fulfilment of the Old Testament in the New Testament Part 1 →