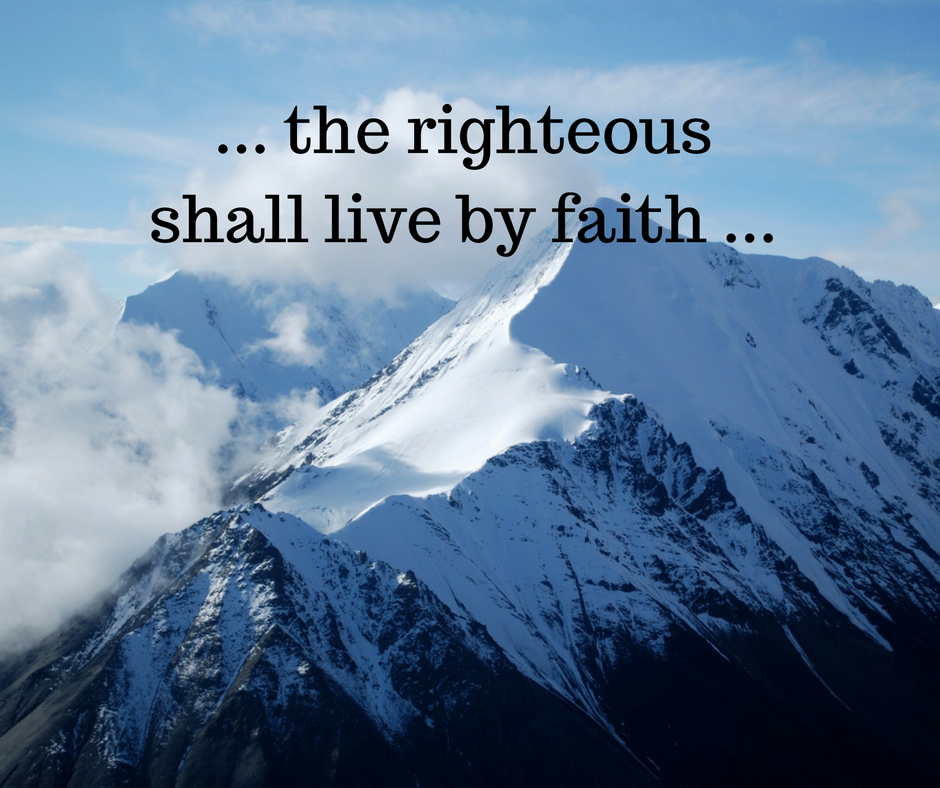 The New Testament quotes Habakkuk 2:4 three times: The just shall live by faith (Romans 1:17b; Galatians 3:11; Hebrews 10:38). And without faith, the writer of Hebrews (11:6) makes clear, it is impossible to please Him, for he who comes to God must believe that He is, and that He is a rewarder of those who diligently seek Him. May we all place our faith and trust in the Lord Jesus Christ as the new year starts, for the just shall live by faith.

The Author of Habakkuk

Little is known about Habakkuk. The name ‘Habakkuk’ could mean ‘embrace’, or ‘one who embraces’. When one writes the name in Hebrew, the last consonant is doubled, thus intensifying the meaning to ‘full embrace’ (Fruchtenbaum 2005:4). From the very last verse of the book (3:19b: ‘To the chief musician. With my stringed instruments.’), one could perhaps surmise that Habakkuk was part of the tribe of Levi, but this is speculation, we do not know this for certain. What is certain, however, is that Habakkuk is a prophet (1:1; 3:1). Moreover, he is a very unusual prophet, for usually a prophet speaks for God to the people, but Habakkuk turns this around and approaches God with pointed questions (Baker 1988:41-42; Feinberg 1990:205).

When was Habakkuk written?

In 1:5-6, God says that He will work a wonder which you would not believe if told: God is raising the Chaldeans to be an instrument of discipline and judgement. The Babylonian (Chaldean) empire gained power under Nabopolasser from about 625 BC, gained strength when it destroyed Nineveh, the Assyrian capital, in about 612 BC and then defeated Egypt and her allies at Carchemish in Syria in 605 BC (Baker 1988:42). If what God was going to do was a wonder which you would not believe it were you told it, then Habakkuk must have been written before or during the rise of the Babylonian empire. Then again, in 1:15-16 Habakkuk describes aspects of the Chaldeans’ behaviour, so some of their actions may have already been known to the prophet. Another clue as to the date of this book may come from 3:19b. It appears that the Levitical priesthood was in full session and functioning correctly, so Habakkuk may have been written during the reign of Josiah, after this good king had thoroughly cleansed the temple (Fruchtenbaum 2005:5). Depending on how one calibrates the above data, Habakkuk was probably written sometime during the years 630 and 610 BC.

The Place or Locale

Written at a time when the Northern kingdom in Israel had already experienced the Assyrian invasion, Habakkuk was definitely written in Judea and probably in Jerusalem.

The Purpose and Main Themes of Habakkuk

Habakkuk was disturbed by the violence, iniquity, plundering, strife and contention all around him and took the matter to the Lord in prayer (1:1-4). (Incidentally, this sounds very much like conditions all over the world today.) Why is God not punishing the wicked in Israel for their covenant unfaithfulness? God’s answer is that He is raising the Chaldeans to discipline Israel (1:5-11). But this perturbed Habakkuk even more! Why would God use a more wicked nation like the Babylonians to punish or discipline Israel (1:12-2:1)? Why are the godly afflicted but the wicked seems to have it all their way? God’s answer in 2:2-4 contains the key verse: the just shall live by faith (2:4). Further, in 2:5-20, God answers Habakkuk’s second complaint. The Lord’s final answer is given in a vision to Habakkuk in 3:1-15, after which Habakkuk resolves in faith to wait upon the Lord (3:16-19).

Even though Habakkuk cannot understand God’s ways and even though Habakkuk questions why God would use a more sinful nation to punish Israel, Habakkuk learns that the just shall live by faith. In the end, God’s justice will prevail. At the Second Coming, the Lord Jesus Christ will act in wrath against the enemies of God but the faithful remnant of Israel will be saved and God will vindicate them.

The following chiastic structure proposed by Dorsey (1999:308; cf. also Merrill, Rooker & Grisanti 2011:467) is endorsed, for the structure seems to capture the argument and message of Habakkuk very well.
A Habakkuk’s 1st complaint: How long must I wait for your justice? 1:1-4
B The LORD’s 1st answer: Coming of the powerful army of Babylon 1:5-11
C Habakkuk’s 2nd complaint: How can you allow the wicked to destroy nations more righteous than themselves? 1:12-2:1
D Centre: Wait, for in the end the wicked will be punished, but the righteous will live by faith 2:2-4
C’ The LORD’s answer to 2nd complaint: Woes upon the wicked; he/they will be punished; all wrongs will be righted 2:5-20
B’ The LORD’s final answer: Coming of the even more powerful army of the LORD, who will vanquish Israel’s enemies and rescue Israel 3:1-15
A’ Habakkuk’s final resolution of his first complaint: I will wait for God’s help as long as it takes, no matter what; He is my source of joy 3:16-19

In the end, God certainly ‘wins’; all His sovereign plans will certainly come to pass. Habakkuk 3 is a well-known picture of God’s final justice, but it is submitted that the majority may perhaps misunderstand this chapter. One reason for this is that the verbs of Habakkuk 3:3-15 may be incorrectly translated, as Feinberg (1990:217) contends: ‘The first verb of 3:3 (and so all the verbs through v. 15) should not be translated as a past, as though Habakkuk were placing himself back at the time of the events of Israel’s deliverance from Egypt. It should rather be rendered “cometh” with a future sense…” According to Unger (2002:1911), just ‘as the LORD was manifested when He had redeemed His people out of Egypt, and constituted them His kingdom at Sinai (Exod. 19), so He will appear again to deliver the remnant of his people and judge their enemies as He judged Egypt’. Unger says these events belong to the final destruction of Israel’s foes at the Second Coming of the Messiah. Fruchtenbaum (2005:14) likewise argues that in Habakkuk 3:1-19, the prophet pictures himself living in those days at the time of the Second Coming, so Habakkuk ‘sees himself as a member of the Faithful [Jewish] Remnant in the Tribulation’. Other relevant texts include Isaiah 34:1-6; 63:1-6; Micah 2:12-13, Matthew 24:29-31; and Revelation 19:11-16.

Recently, Hassler (2015) identified multiple similarities between the king mentioned in Isaiah 14 and the proud one of Habakkuk 2. According to Hassler (2015:221), both Isaiah 14 and Habakkuk 2 depict the same end-time monarch and, in ‘both oracles, recently liberated saints sing a taunt song about their recently fallen foe, as they reflect upon the tribulation period which they have just survived’. If Hassler is correct, then this strengthens even further the idea that Habakkuk 3 should be read with the end of the Tribulation Period in view, at the time of the Second Coming of the Lord Jesus Christ.

Applications for Today and for the Year

When Habakkuk received this message, things were going to become much tougher, because God was about to bring judgement on Juda and Israel through the Babylonian captivity. But God never rejected Israel, for afterwards He brought a remnant back to the land of Israel. Many years later, in AD 70, God judged another generation in Israel, this time scattering them all over the world (Deuteronomy 30:1; Luke 21:24). But God never rejected Israel, not even temporarily, for there is always a believing Jewish remnant (Romans 11:1-15). Today, God is again bringing the Jews back to their land: Ezekiel 20:33-38 and Zephaniah 2:1-2 teach that there will be a worldwide regathering of Jews predominantly in unbelief to their land in preparation for judgment, specifically the judgment of the 7-year Tribulation Period (Fruchtenbaum 1989:716; White 2014:1401). The modern state of Israel since 1948 is therefore no accident of history, but fulfils Bible prophecies. In God’s perfect time, the events described in Habakkuk 3 will transpire, and after the Tribulation Period there will be a second regathering of Jews to Israel, in faith and in preparation for the blessing of the Messianic kingdom. The modern state of Israel’s (partial) control over Jerusalem since 1967 is also no accident of history, for Israel must have some control over the Temple Mount so that the prophecies of Daniel 9:27; Matthew 24:15; 2 Thessalonians 2:3-4; and Revelation 11:1-2 can be fulfilled. But until God lets these events transpire, we in the Church are to be witnesses of Christ, declaring the gospel to an unbelieving world, for this gospel of Christ is the power of God for salvation to everyone who believes, to the Jew first and also to the Greek. Just as God is always faithful to fulfil the promises He made to Abraham, Isaac and Jacob, so He is faithful to his Church. The Church is to make disciples of Jesus Christ out of all the nations all over the world. Blessed are the God and Father of our Lord Jesus Christ, who has blessed us in Christ with every spiritual blessing in the heavenly places (Ephesians 1:3). We don’t know if things are going to get better or worse this year, but whatever happens, God is in control and will do as He has promised —in the meantime, the just shall live by faith (Hab 2:4; cf. 3:18-19a). Selah.

← Read The Basis of the Second Coming of Christ read Genesis →