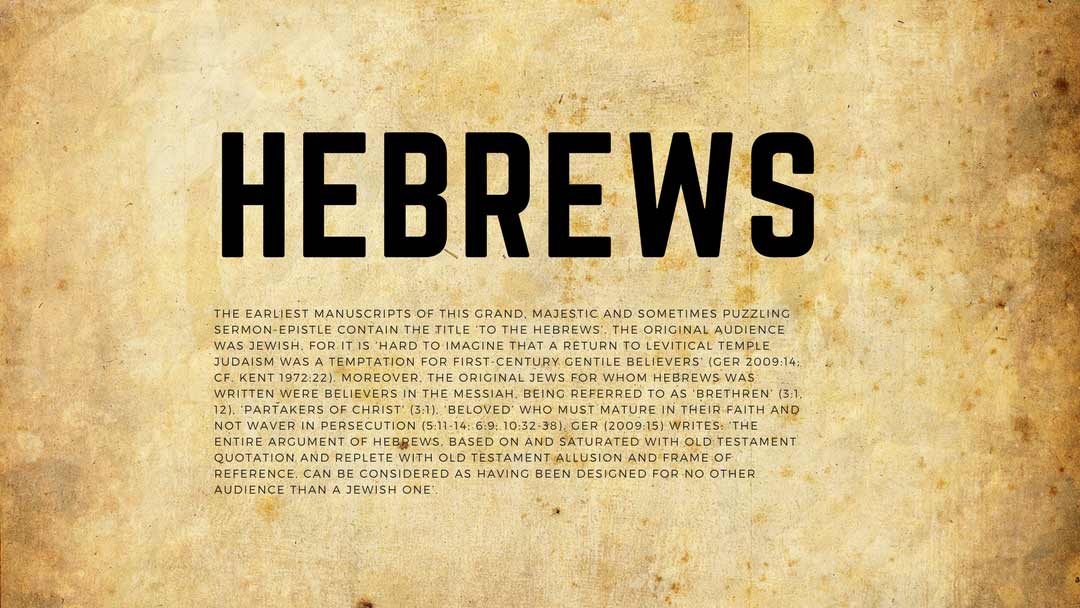 The earliest manuscripts of this grand, majestic and sometimes puzzling sermon-epistle contain the title ‘To the Hebrews’. The original audience was Jewish, for it is ‘hard to imagine that a return to Levitical temple Judaism was a temptation for first-century Gentile believers’ (Ger 2009:14; cf. Kent 1972:22). Moreover, the original Jews for whom Hebrews was written were believers in the Messiah, being referred to as ‘brethren’ (3:1, 12), ‘partakers of Christ’ (3:1), ‘beloved’ who must mature in their faith and not waver in persecution (5:11-14; 6:9; 10:32-38). Ger (2009:15) writes: ‘The entire argument of Hebrews, based on and saturated with Old Testament quotation and replete with Old Testament allusion and frame of reference, can be considered as having been designed for no other audience than a Jewish one’.

Where These Hebrews Were

Where did these Hebrew believers live? It is unlikely that they lived in Jerusalem, for none of them had suffered martyrdom (Hebrews 12:4) whereas the church in Jerusalem had already lost Stephen and the apostle James (Acts 7; 12:2; Kent 1972:24-25). Hebrews 2:3 implies that the original readers had not personally heard Christ speak, but surely someone in the church in Jerusalem heard Jesus speak (Kent 1972:23). It is also unlikely that these Jewish believers for whom Hebrews was originally written lived in Rome, because the Jews of Rome ‘lived too far away from Jerusalem to be tempted so strongly to return to the sacrificial system of Jerusalem’ (Fruchtenbaum 2005:5). Hebrews 2:3-4 makes it clear that these Jewish believers were evangelised by eyewitnesses of Jesus, but the church in Rome was not established by an apostle (Romans 1:1-14; 15:20). So again, where did these Hebrew believers live?

Without being overly dogmatic about it, the original audience may well have been Jewish believers living in Judea (Fruchtenbaum 2005:5; Ger 2009:20-21 — cf. Galatians 1:22). These believers suffered previously (Hebrews 10:32-35), probably in the aftermath of the events of Acts 8:1, and may now face more persecution: ‘The impending persecution that is alluded to in Hebrews (12:4) and the severity of the author’s five warnings should relate to the events of the first Jewish revolt against Rome (AD 66-73)’ (Ger 2009:20). It is these Judeans that must flee to the mountains (Luke 21:21).

During Christ’s first advent, the generation of Jews who lived in Israel, viewed as a collective group, committed the unpardonable sin by rejecting the work of the Holy Spirit performed through the Messiah (Matthew 12:22-45; Fruchtenbaum 2005:11). This national sin not only had significant consequences relating to the offer of the kingdom and subsequent revelation of the mysteries of the kingdom (Scholtz 2015:2-4), but since this national sin was unpardonable, it would be judged by the destruction of Jerusalem and the temple in AD 70. Ger (2009:20) writes: ‘This divine judgement had been central to the witness of John the Baptist, who repeatedly warned his audience of “the wrath to come” which would imminently descend on Israel (Matt. 3:7)’. Since the unpardonable sin is not an individual sin, many Jews could — and did! — change their minds (repent) about who Jesus Christ is and identified with Him through baptism instead of remaining identified with ‘this wicked generation (cf. Acts 2:40) who faced judgment. What has this got to do with Hebrews?

Probably written in the late AD 60’s (Tenney 1985:359) or more specifically AD 65-66 (Ger 2009:10), it became clearer why the ‘grand argument of the book and its stirring challenge [is] to ‘go out to him outside the camp’ (Kent 1972:9; cf. Ger 2009:11). Many of these Judean believers in Messiah thought they ‘could temporarily lay aside their salvation and go back into Judaism until the persecution subsided. Once the persecution subsided they could be saved again later. …The author of this epistle will point out that they do not have this option’ (Fruchtenbaum 2005:12). If they returned to Judaism, they would physically perish in AD 70. This ‘word of exhortation’ (13:22) exhorts the original readers to ‘persevere in the faith instead of abandoning Christianity and returning to Judaism’ (Bailey & Constable 1999:505). The outbreak ‘of the war with Rome proved to be the event that finally separated Judea’s Jewish believers and their fellow Jews’ (Ger 2009:11).

The grand theme of Hebrews is that Christ is superior. ‘As the author expounds on the good and the better, he takes the three main pillars of the Judaism of that day — angels, Moses, and the Levitical priesthood — and shows that what the readers now have in Messiah is superior to all three pillars of Judaism’ (Fruchtenbaum 2005:13). Not only is Christ pre-eminent (1:1-4), but He is better than the angels despite taking on humanity in addition to his pre-existent divinity (1:5-2:18). Christ is superior to Moses (3:1-4:16), to Aaron (5:1-6:20) and, as the High Priest according to the order of Melchizedek (7:1-28), Christ is mediating a better covenant in a better sanctuary based on a better sacrifice (8:1-10:18). Believers are given practical and personal exhortations (10:19-13:25).

We are to consider Jesus, the Apostle and high Priest of our confession (3:1). Jesus Christ is the Son of God, ‘the radiance of the glory of God and the exact imprint of his nature, and he upholds the universe by the word of his power. After making purification for sins, He sat down at the right hand of the Majesty on high’ (1:3). Look to Jesus, the Author and Perfecter of our faith (12:2).