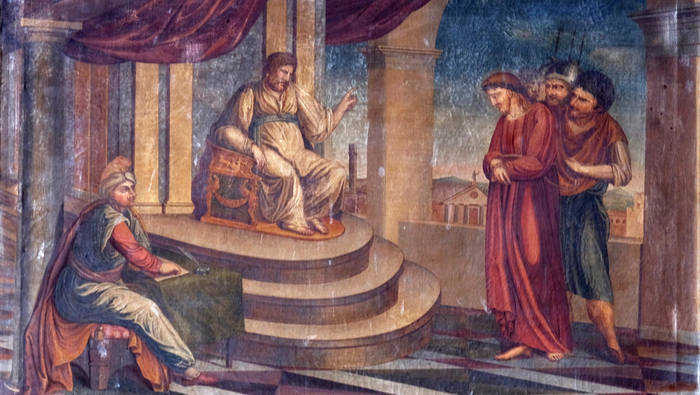 My Kingdom is not of this World

As part of a civil trial, and in reply to the question whether he is the King of the Jews, Jesus answered Pilate, “My kingdom is not of this world. If My kingdom were of this world, My servants would fight, so that I should not be delivered to the Jews; but now My kingdom is not from here” (Jn 18:36; NKJV). Many replacement theologians, especially amillennialists, use this text to argue that the kingdom is entirely spiritual, and that Jesus never meant to establish a literal kingdom on the earth. This misunderstanding must be addressed.

In a fake religious trial, the Sanhedrin found Jesus guilty of a trumped-up charge of blasphemy (cf. Mat 26:65-68). Under Jewish law, blasphemy was punishable by death (Lev 24:16). The religious leaders could not, however, execute a death sentence (cf. Joh 18:31). They needed a death sentence under Roman law, but Rome would not execute any Jew on a charge of blasphemy. As a result, a civil charge against Jesus was brought to Pilate, namely of sedition against Rome (Luk 23:2). The issue becomes whether Jesus is a King and whether his kingdom is a threat to Rome. So, when Pilate entered the Praetorium again, he called Jesus, and said to Him, “Are You the King of the Jews?” (Jn 18:33).

Jesus answered Pilate, “Are you speaking for yourself about this, or did others tell you this concerning Me?” (Jn 18:34). If Pilate was interested in becoming a follower of Christ – “are you speaking for yourself about this” – then Jesus would have given him an answer corresponding to a sincere inquiry. The Saviour is acting gracefully towards this Roman prefect. If, however, Pilate was merely focusing on his job as procurator for Rome, then the answer would correspond to such an inquiry. Constable (2019:456) comments on John 18:34:

Jesus asked Pilate His question to determine how He would answer him. If his question had arisen from his own understanding and curiosity, Jesus presumably would have dealt with him as a sincere inquirer. If Pilate was merely trying to clarify the essence of the Sanhedrin’s charge, Jesus would need to answer differently. If Pilate meant, “Are You a political king conspiring against Caesar?” the answer would be, “No.” If he meant, “Are You the messianic King of Israel?” the answer would be, “Yes.”

Pilate’s answer distanced himself from the Jewish Messiah: ‘“Am I a Jew? Your own nation and the chief priests have delivered You to me. What have You done?”’ (Jn 18:35). Pilate is interested only in the charge of sedition, on whether Jesus is a threat to Rome.

Jesus’ reply in John 18:36 can be analysed based on three main aspects concerning His kingdom. First, Jesus explained the origin and source of this kingdom. Second, Jesus said the kingdom will not now be established – but established it will yet be. Third, consider when Jesus said these words.

First, Jesus did not say that His kingdom will not someday be in this world, He said it is not of this world. This speaks to the source or origin of Jesus’ kingdom which He will establish. As Fruchtenbaum (2017:580) stresses, one chapter earlier in the Gospel of John, Jesus said that He gave his disciples the Word, and “the world has hated them because they are not of the world, just as I am not of the world” (Jn 17:14; emphasis added). Satan has his kingdom of darkness and the world follows that kingdom’s nature, but Jesus and his believers are not of this world-system and its nature. The origin and source of Jesus’ kingdom will be from God, it will have a heavenly source. Woods (2016:235) uses Daniel 2:44 to connect the God of heaven to the future kingdom: ‘…the God of heaven will set up a kingdom which shall never be destroyed’. The kingdom of heaven will be established on the earth when Christ returns to the earth as part of the Second Advent. Constable (2019:457) summarises this point well:

Second, notice that Jesus said ‘…but now [Greek: nyn] My kingdom is not from here’ (Jn 18:36b; emphasis added). According to Woods (2016:233), the ‘idea is “My kingdom is not now established”. In other words, Christ was not denying the kingdom’s ultimate arrival upon earth. Rather, he was only denying its immediate arrival.’ When Jesus uttered these words, Christ’s kingdom was not an immediate threat to Rome. Of course, one day it will be a threat to the kingdoms of this world, for the stone cut out of the mountain without hands, will break into pieces the iron, the bronze, the clay, the silver, and the gold; it shall break in pieces and consume all these kingdoms, and Christ’s kingdom shall stand forever (cf. Dan 2:44-45).

Third, bear in mind that this civil trial occurred about 3,5 years after Christ’s public ministry had started, near the end of Christ’s first advent. By this time, the kingdom of heaven had been offered to first-century Israel (Mat 3:2; 4:17; 10:5-7; cf. 15:24); but under the authority of the religious leaders ‘this generation’ in Israel’s history had rejected Christ (cf. Mat 12:23-32); and the establishment of the kingdom had already been postponed until Christ’s second coming to the earth (cf. Mat 21:43; 23:39). These facts should not be ignored when considering the kingdom and the events recorded in John 18:28-38.

Jesus did not suddenly teach a Roman procurator, who wanted little to do with the Jews, that His kingdom is entirely spiritual and will never be established on the earth. When Pilate asked Jesus, “Are You a king then?”, Jesus answered unequivocally, “You say rightly that I am a king (Jn 18:37). The kingdom of heaven that Jesus will establish will have a heavenly origin or source, but this does not mean His kingdom is only spiritual or that it will not be established on the earth. When the Son of Man comes in His glory, and all the holy angels with Him, then He will sit on the throne of His glory (Mat 25:31). When Christ sits on his Davidic throne, few will then still ask, “What is truth?”, for all will behold not only the Way and the Life, but also the King of Truth.

← Read Given to a Nation Producing the Fruits of it . . . Read When Shall the Kingdom be Restored to Israel? →