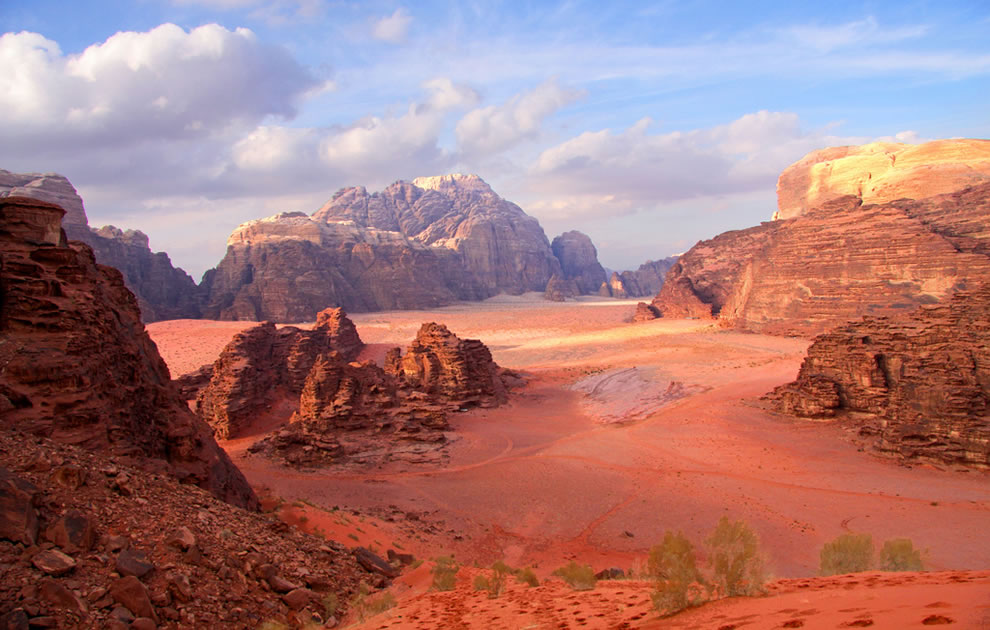 Obadiah is the shortest book in the Old Testament. Even its introduction is short — ‘the vision of Obadiah’ — with no mention of the name of the prophet’s tribe, where he lived or whose son he was. The name ‘Obadiah’ means the ‘servant of the LORD’. Perhaps that is all we need to know about him, for a servant cares about doing the will of God and attracts little attention to him or herself. What makes the book of Obadiah challenging is not only to date the book, but also to identify when its prophecies were or are still going to be fulfilled.

The opening verses of the book provide its theme: a prophecy of doom against Edom (vv. 1-4; Feinberg 2003:125). The land of Edom is where the descendants of Esau, the twin brother of Jacob, live. This land corresponds to the southern part of modern-day Jordan where you find magnificent red-coloured mountains. High upon the clefts of these rocks, Esau’s descendants built cities such as Sela, Teman, Dedan as well as Bozrah (also known as Petra). When the prophecies of Obadiah are fulfilled, there will be no survivor of the house of Esau (v. 18).

Fulfilment of the Prophecies of Obadiah

When the prophecies of Obadiah are all fulfilled, the LORD says there ‘shall be no survivor for the house of Esau’ (v. 18) and Esau will be so completely pillaged that it will be without any of its possessions (vv. 5-6). Since king Herod was a descendant of Esau (in the Greek: Idumean), these prophecies were not fulfilled before the birth of Christ. If there is even just one descendant of Esau in the world today, then Obadiah’s prophecies have not yet been fulfilled, because Obadiah 18 clearly states that there will be no survivor of the house of Esau. The prophecies of Obadiah will therefore only be fulfilled in the coming seven-year Tribulation Period (Fruchtenbaum n.d.:9; Hassler 2016:246-254). Believers who have physically survived the Tribulation Period will enter the Messianic kingdom with their physical bodies, re-populating the earth during the millennium (cf. v 21). While there may be descendants of Esau who became believers in history, not one such believer will physically survive the Tribulation Period and enter the kingdom with their physical bodies, and so Edom will be cut off completely.

For a detailed defence of the view that the prophecies of Obadiah will be fulfilled in future during the Day of the Lord (cf. v. 15), see Hassler (2016).

It is one thing to say these prophecies will be fulfilled in the eschatological future; it is another to estimate when Obadiah was written. We lean towards the earlier date of about 845 BC when Edom assisted in the overthrow of Jerusalem during the reign of king Jehoram (2 Kings 8:20-22; Constable 2017:4; McCord 2014:1357). Good commentators, however, hold the view that Obadiah was written shortly after the Babylonian captivity took place, i.e. shortly after 586 BC (Rooker 2011:440). Regardless of the exact date when Obadiah was written, it does not change the fulfilment of the prophecies against Edom, because the LORD has spoken.

The Purpose of Obadiah

The purpose of Obadiah is twofold: to warn Edom of its future doom (vv. 1-4) but also to encourage the remnant of Israel that the Messianic kingdom will be established (v. 21). It is, however, not only Edom that is warned, but all nations are warned, for ‘as you have done, it shall be done to you; your deeds shall return on your own head’ (v. 15). Nations that go up against Jerusalem shall not escape God’s judgement (v. 16; cf. Zechariah 12:2-3) — something that so many nations today seem to forget. Stated in terms of the Abrahamic Covenant, if you curse the Jewish descendants of Abraham, then you will also be cursed (Genesis 12:3). It is interesting to compare the reasons for God’s judgement against Edom (and all the nations that do likewise) in Obadiah 1-14 with the reasons for God’s judgement of the nations in Matthew 25:31-46.

The Structure of Obadiah

We favour a slightly amended version of the chiastic structure that Dorsey (1999:289) identified:

A Proud Edom will be defeated by the nations vv. 1-4
B Edom will be plundered vv. 5-6
C Edom’s population will be slaughtered vv. 7-9
D Indictment of Edom vv. 10-14
C’ Edom & the nations will be judged vv. 15-16
B’ Israel will regain its possessions and plunder Edom vv. 17-18
A’ Humbled Israel will be victorious over the surrounding nations vv. 19-21

The problem and doom of Edom is the same problem and doom each of us has: pride (v. 3). If God judges us based on what we have done (v. 15), then all of us will deservedly end up in the lake of fire. God has offered human beings one way of salvation and that is to trust and believe in the Lord Jesus Christ’s perfect blood sacrifice on the cross (cf. John 14:6). A just God can then judge us not based on our sinful and fleshly pride, but declare us righteous based on the completed work of Jesus Christ, who died, was buried and rose again on the third day. The test for nations is how they treat Israel and, as Obadiah shows (vv. 10-14), Edom as a nation has already failed the test and will be judged as a nation accordingly (Genesis 12:3; Obadiah 1-21; Zechariah 12:2-3; cf. Matthew 25:31-46).