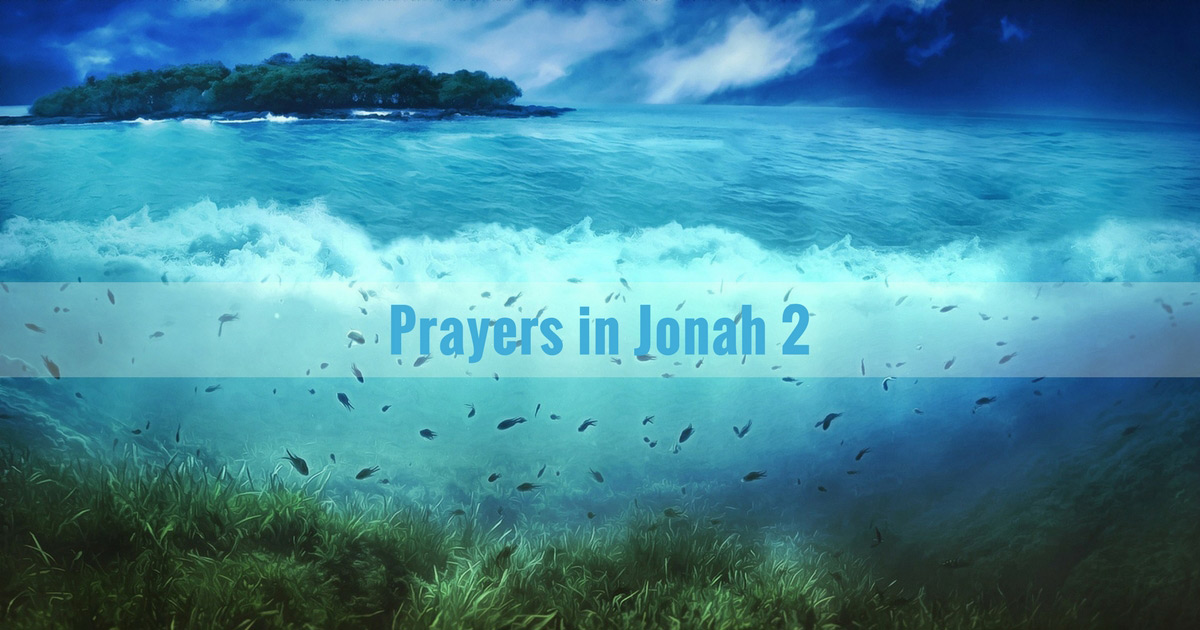 The book of Jonah is neither an allegory nor some fantasy. This is a true story about a true prophet (2 Kings 14:23-25) who fled in a ship to Tarshish and who was swallowed by a large fish and vomited out three days and three nights later (Jonah 1:3, 17; 2:10). The pagan sailors were real people who came to salvation (1:14). The people of Nineveh really converted and were saved (3:10; 4:11). Jesus affirms that Jonah is a true story of a true prophet and uses the death and resurrection of Jonah as a sign that the Son of man would be three days and three nights in the heart of the earth (cf. Mat 12:39-40). All the different prayers in Jonah testify that salvation really is of the LORD (cf. Jonah 2:9; cf. also 1:14; 3:10; 4:11).

Jonah’s First Prayer: As He Was Dying

Chapter 2 of Jonah contains more than one prayer. Chapter 1 ends with the LORD preparing a great fish to swallow Jonah — and even here the Scriptures already testify that Jonah was three days and three nights in the fish’s bowels (1:17). Regarding chapter 2 of this book, Jonah prayed three prayers. The first prayer came when Jonah was drowning in the heart of the seas, when waters and floods surrounded him, when waves passed over him and weeds wrapped around his head (vv. 3, 5). As he was dying, Jonah sank (v. 6a) and his soul fainted in him — but then Jonah remembered the LORD (v. 7a) and his prayer went up to the LORD in His holy temple (v. 7).

Jonah’s Second Prayer: Out of the Belly of Sheol

Jonah’s second prayer is prayed from the belly of Sheol (2:2). Jonah has already died, the fish has probably already swallowed his dead body, but Jonah’s immaterial part was in Sheol (the Hebrew word) or Hades (the Greek word). At that time in history, Sheol contained four compartments, two for people that had died (believers and unbelievers) and two for fallen angels (temporary prison (pit or abyss) and permanent prison (Tartarus)). Jonah’s immaterial part was in the compartment for Old Testament believers, also known as ‘Abraham’s bosom’ (Luke 16:22-23) or paradise. At Christ’s ascension, He took the immaterial part of all Old Testament believers with Him into heaven, thus moving paradise into heaven (cf. Eph 4:8-10). Since Christ’s ascension, when believers die their immaterial parts go to paradise in heaven where Christ Jesus now is. In his second prayer, Jonah vowed to do something for the Lord (2:9) — and from the rest of the book one can infer the content of this promise (cf. 3:1-3). Jonah’s second prayer therefore takes place in Sheol — and the LORD answered him (v. 2).

Jonah’s Third Prayer: From within the Great Fish

Chronologically speaking, Jonah’s third prayer takes place last, but is recorded first in chapter 2. The immaterial part of Jonah has been united with his body in the great fish — that is a resurrection — and now Jonah prays ‘from the fish’s belly’ (2:1). Jonah looks back at the events of the previous days (vv. 2-6), but above all, he testifies that the LORD ‘has brought up my life from the pit’ (v.6b) and Jonah praises the LORD (v. 9). The ‘real miracle of Jonah was not that he was kept alive in the abdomen of the fish’, but rather the ‘real miracle is the miracle of resurrection of the dead from the midst of Sheol’ (Fruchtenbaum 2005:11). The third prayer in Jonah 2 looks back at what happened the previous three days and three nights — and then the LORD spoke to the great fish and it vomited Jonah onto dry land (v. 10).

Salvation in all its facets (initial justification, continuous sanctification and ultimate glorification) is neither an allegory nor some fantasy. God really sent His Son to the earth, Jesus Christ really died on the cross and really rose from the dead three days and three nights later (Mat 27:50-51; 28:6; Jn 3:16; cf. 1 Cor. 15:1-4). Is a prayer all that you and I need? Jonah teaches that salvation belongs to the LORD and it is this same God who presents eternal life in Christ Jesus as a gift to us all (Jonah 2:9; Rom 6:23).

Late in the midnight hours and burdened by his sins, the prison guard realised the danger and asked what he must do to be saved — and this answer came, “Believe in the Lord Jesus Christ, and you will be saved” (Acts 16:31). At the feet of the cross, and with this little prayer, he received an entry into God’s royal kingdom (cf. Hofmeyr 2018). Is a prayer all that you and I need? God really saved the people of Nineveh just like the Queen of the South really was included in God’s gracious plan of salvation (cf. Mat 12:40-41).

Salvation in all its facets (justification, sanctification and glorification) is of the LORD (cf. Jonah 2:9). Have you already received, by faith alone, God’s gracious gift of salvation in Jesus Christ alone (Jn 3:16; Rom 6:23; 1 Cor 15:1-4)?

Jonah 1:17-2:10, NKJV
117Now the LORD had prepared a great fish to swallow Jonah. And Jonah was in the belly of the fish three days and three nights. 21Then Jonah prayed to the LORD his God from the fish’s belly. 2And he said: “I cried out to the LORD because of my affliction, And He answered me. “Out of the belly of Sheol I cried, [And] You heard my voice. 3For You cast me into the deep, Into the heart of the seas, And the floods surrounded me; All Your billows and Your waves passed over me. 4Then I said, ‘I have been cast out of Your sight; Yet I will look again toward Your holy temple.’ 5The waters surrounded me, [even] to my soul; The deep closed around me; Weeds were wrapped around my head. 6I went down to the moorings of the mountains; The earth with its bars [closed] behind me forever; Yet You have brought up my life from the pit, O LORD, my God. 7“When my soul fainted within me, I remembered the LORD; And my prayer went [up] to You, Into Your holy temple. 8“Those who regard worthless idols Forsake their own Mercy. 9But I will sacrifice to You With the voice of thanksgiving; I will pay what I have vowed. Salvation [is] of the LORD.” 10So the LORD spoke to the fish, and it vomited Jonah onto dry [land].