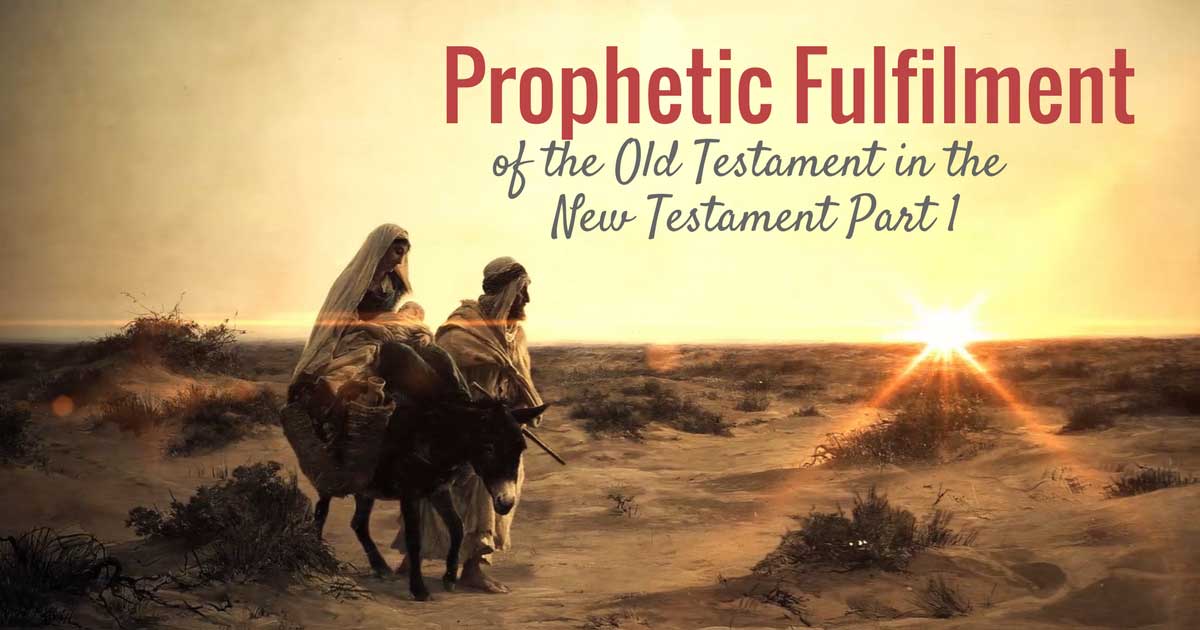 How does the New Testament indicate that prophetic fulfilment of the Old Testament has taken place? This question is not dry, abstract or only of academic interest, because it has an important impact on the doctrine of end times (eschatology).

Fruchtenbaum (2016:12–13) notes that New Testament writers used the Old Testament in the same fourfold manner as the rabbis of that time, namely pshat (direct fulfilment), remez (typological fulfilment), drash (analogical fulfilment) and sod (summation fulfilment). He (ibid:10-44) also provides several rabbinic examples of each of these four ways of fulfilment of the Old Testament in the New Testament. It is important to note that even if these rabbi’s sometimes made non-literal applications, they still acknowledged the literal meaning of Scripture and its divine inspiration (ibid:11).

Matthew 2:5-6 contains the direct fulfilment of a direct prophecy. Not only does Micah 5:2 prophesy that the Christ will be born in Bethlehem, Ephrata, but his ‘goings forth are from of old, from everlasting’ (NKJV) – clear proof of the eternality and divinity of Christ.

This category of a literal fulfilment of a direct prophecy (pshat) is relatively simple, especially if most (or all) of the referents of the Old Testament prophecy are already known. However, not all direct prophecies are that simple. Some Old Testament prophecies’ referent(s) are not known, but the meaning of that Old Testament text is still adequately determinable (Feinberg, P.D., 1988:123). The literal fulfilment of direct prophecies, like for instance Christ’s second coming and his work on earth, must happen and be fulfilled, otherwise it could imply – with respect, for the sake of argument – that Isaiah or Zechariah, for instance, could be viewed as false prophets, which they certainly are not.

Is the fulfilment of Matthew 2:15 typological, or merely an application or analogy? Since Hosea 11:1 describes a historical event and not a prophecy, Ladd (1977:21–23) thinks that Matthew reinterprets the Old Testament in the light of the Christ event and he finds a so-called ‘deeper meaning’ in the text. However, Rydelnik (2010:101–102) convincingly shows that the following divinely determined type/antitype-relationship is established in Numbers 23:18-24 and Number 24:7-9: What God does for Israel, He will also do for the future king or Israel. As God called Israel out of Egypt, so God will call the future king of Israel out of Egypt. Why does Matthew then quote Hosea and not Numbers 24:8? Matthew did not just want to emphasize Israel/the king of Israel’s exit from Egypt, but also national Israel’s/Christ’s relationship as son/Son of the Father (Rydelnik 2010:103–104). The following table shows that a type/antitype-relationship (remez) is established in the Pentateuch:

Israel As A Type Of The Future King Of Israel

There are no grounds to claim that Matthew changes, reinterprets or uses the Old Testament out of context. In fact, the opposite is true.

When Herod kills all the boys of two years and younger in Bethlehem and surrounds, Matthew 2:17 uses the expression ‘then [it] was fulfilled’, quoting Jeremiah 31:15. Does Matthew quote the Old Testament ‘creatively’ or even ‘evasively’, as France (2007:88) claims? During the Babylonian invasion, young men of Judea were taken prisoner and gathered at Rama before Nebuchadnezzar’s men took them into exile to Babylon (ibid:87). Of course, it was not Rachel who mourned her children (her body has not resurrected from the dead yet), but Rachel serves as a symbol of Jewish motherhood (Fruchtenbaum 2016:24–25). What literally happened in the time of the Babylonian exile was that weeping and great sorrow was heard, because Jewish mothers mourned their sons who had been taken into exile.

The fulfilment of Jeremiah 31:15 to which Matthew 2:17-18 refers is one of application or analogy (drash). A similar situation had arisen and was used by Matthew: Jewish mothers mourned little boys who are no longer there, and an application or analogy is made. This is not a direct prophecy, because the referents differ: Rama over against Bethlehem, the Babylonians over against Herod, young men over against boys under two years old. It is not typological fulfilment either, because it does not meet the criteria for this (ex.: a divinely determined type/antitype-relationship, foreshadowing, escalation). What Matthew does is to relate similar things in the two situations with each other, namely Jewish mothers who mourn their sons who are no longer there (Jer 31:15; Matt 2:16-18). It is therefore an applicational or analogical fulfilment.

During the Second World War when Jewish mothers saw their sons being put on trains to be taken to gas chambers, did Rachel weep again? Rydelnik (2010:107) rightfully says that the move from exegesis to Biblical principles to current-day application is something that happens almost intuitively. When Matthew and other writers of the New Testament make such applications or analogies, they are not using the Old Testament out of context, creatively or enigmatically. The exact opposite is in fact the case.

This third category of fulfilment of the Old Testament in the New Testament is where the debates concerning midrash, sensus plenior and references plenior arise. The aim of midrash was neither to use parts of Scripture out of their literary context nor to work with the text anachronistically; on the contrary, the aim of midrash for rabbi’s before AD 70 was to understand Scripture in context and to make it relevant and applicable for their contemporary listeners. Sometimes the New Testament adds additional referents (references plenior) to Old Testament texts to make an applicational or analogical fulfilment. This does not, however, change the meaning of the Old Testament text.

Nowhere in the Old Testament does any prophet explicitly say that Jesus will be called a Nazarene; yet Matthew 2:23 says that the prophets said so. One clue to the meaning of this is the reference to prophets (in the plural) ‘who said’. The remark touches on an overarching and general theme in the prophecies, namely that Christ would be a man of suffering, one who would be misunderstood and rejected (cf. Isa 53:3; John 1:46). Matthew therefore summarizes something about which all the Old Testament prophets testify. The fourth kind of fulfilment of the Old Testament in the New Testament is therefore summation fulfilment (sod), because the inspired text of the New Testament summarises what the prophets said collectively about something or someone (Fruchtenbaum 2016:38–40). This kind of fulfilment in the New Testament occurs less frequently (for instance Matt 26:56; Acts 3:18–24; Rom 1:2) and it seems as if it is exclusively Christological in nature.

In the next article, we will discuss the prophetic fulfilment of the Old Testament in the New Testament further.

The above is an English extract from:

Other sources to which the article refers to can be found in In die Skriflig.