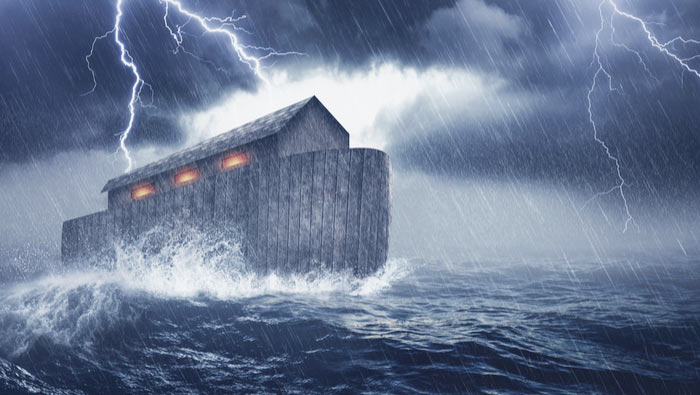 The union referred to in Genesis 6:1–4 occurred between the ‘sons of God’ and the ‘daughters of men’. The term ‘sons of God’ refers to persons that God created directly. God created all angelic beings directly (cf. Job 1:6; 2:1; 38:7). God also created Adam directly and therefore he is also called a ‘son of God’ (Luk 3:38). Adam’s descendants, however, are created indirectly through human reproduction and not directly by God.

The ‘sons of God’ in Genesis 6:1–4 therefore refer to fallen angels. Christ said that the angels of God who are in heaven are not given in marriage (Mat 22:30). Good or holy angels are where God wants them, and they are not given in marriage. However, these fallen angels did exactly the opposite, for they did not keep their proper domain but left their own abode (Jud 6).

It is evidently possible for fallen angels to adopt physical human form and to have sex with women. God did not, however, view this union as a ‘marriage’, but rather called it ‘fornication’ (Jud 7) because sexual acts committed outside of God’s order for marriage between a man and a woman receive that description. Moreover, Genesis 6:3–4 makes it very clear that God strongly rejected this sexual immorality.

If it is said that the ‘sons of God’ actually refer to the line of Seth (only the men) who intermarried with the line of Cain (but only the women) — and the presupposition is that the line of Seth included only godly people and that the line of Cain produced only evil people — if that’s the argument, then it might be said right back that godly men generally try to avoid marrying evil woman (cf. Fruchtenbaum 2009:147). Moreover, if this were to happen in history (as it surely does, unfortunately), why is the whole earth not judged with some huge calamity every time this happens? The godly-male-offspring-of-Seth-marrying-the-ungodly-female-offspring-of-Cain reasoning doesn’t work. Also, if Genesis 6:1–4 referred to marriage between human beings, why was the ‘intermarriage’ only in one direction but not the other way around, namely that the daughters of men also chose sons of God to marry? There is simply no indication in Genesis 3 to 6 that God forbade the offspring of Seth to marry the offspring of Cain (or vice versa). Apart from eight people (Noah’s family), all Seth and all Cain’s descendants perished in the flood. The reasoning that Seth’s line only consisted of godly people ignores the fact that Adam’s descendants all inherit the fallen human nature (but not Jesus). Regarding the term ‘daughters of men’, this refers undoubtedly to the female side (‘daughters’) of humanity in general (‘of men’). Note that there is nothing in the text to indicate that these women were better or worse than other women (cf. Unger 1994:47–48).

The product of this strange and sinful union between fallen angels and women was male descendants — only male descendants, quite unusual — called ‘nephilim’. These creatures were not pure human beings but a mix between fallen angels and humanity. They are also called ‘gibborim’ (meaning ‘the powerful’ or ‘the mighty’). These ‘men of renown’ or ‘giants’ (Septuagint) were in a sense exceptional, but what they were did not carry God’s approval. On the contrary, the flood, which took place 120 years later, formed part of God’s judgment on these events (Gen 6:3; 7:1–8:12; 2 Pet 2:4–5). Except for the eight people in the ark, the flood destroyed humankind of that time. As for the judgment of these fallen angels, the New Testament provides more detail.

God reserved for judgement these fallen angels who left their proper domain by casting them down to Tartarus and by putting them in everlasting chains under darkness for the judgment of the great day (2 Pet 2:4–5; Jud 6–7). Tartarus is a place of imprisonment for these fallen angels where they await their final, everlasting sentence in the lake of fire (Showers 1997:89). They are permanently confined and will be moved from Tartarus to the great white throne judgement and then be thrown into the lake of fire. During the three-day period between Jesus’ death and resurrection, Christ proclaimed to these fallen angels, presumably declaring that Satan’s evil plan had failed, and that Christ had won (1 Pet 3:19). What was Satan’s evil strategy?

Immediately after the fall, God promised the serpent — but it is Satan who was behind the serpent (cf. Rev 12:9; 20:2) — that God will set enmity between you and the woman, and between your seed and her seed (Gen 3:15). There has since definitely been enmity between women/womanhood and Satan; this is especially evident in places where God is not served or honoured. In the first Messianic prophecy, God promised that the Messiah would be born of the seed of the woman, and that Seed would crush Satan’s head (Gen 3:15). In an effort to prevent this prophecy from being fulfilled, Satan sent some of his fallen angels to have sexual relations with women. The aim of this evil plan was to corrupt the human gene pool with fallen angels to prevent the existence of a pure human race from which the Messiah was to be born. This interpretation is confirmed by Genesis 6:9, which states that ‘Noah was a just man, perfect [genetically unblemished] in his generations’. Noah and his descendants were not genetically polluted by the mixing of fallen angels and humanity (Fruchtenbaum 2009:159–160; Showers 1997:103–104).

Christ defeated Satan at the cross, but the devil’s sentence has not yet been executed. The New Testament therefore states that Satan is still the ‘ruler of this world’ (Joh 12:31; 16:11; cf. 2 Cor 4:4; Eph 2:2). For this reason, Satan’s kingdom promotes the idea that you must make a name for yourself —‘I did it my way’ (Sinatra) — that you must be a giant titan (cf. Gen 6:4; 11:4). The same world system under Satan promotes Greek and Roman mythologies that actually glorify the actions of those fallen angels referred to in Genesis 6:1–4. The Bible, however, tells the true story of what happened: fallen angels took women for themselves and produced (only) male descendants with extraordinary attributes, but God condemned this as evil.

Given humanity’s fallen nature, what can we do without Christ? To some, Jesus’ words may be a bitter pill to swallow: ‘Without Me you can do nothing’ (Joh 15:5). If you want to be a true man or woman of renown, bow before your Creator and don’t go in the ‘way of Cain’ (Jud 11), trying to reconcile yourself to God in your own-appointed way. Jesus Christ is the Way and the Truth and the Life, no one comes to the Father except through Him (Joh 14:6). Wisdom is justified by her children — and one of her children wrote: ‘I can do all things through Christ who strengthens me’ (Phil 4:13; cf. Mat 11:19b). Those who want to glory must glory in the LORD. The true men and women of renown are the giants of the faith who ‘run with endurance the race that is set before us, looking unto Jesus who is the author and finisher of our faith’ (Heb 12:1b–2a).

← Read People and Nations Are Being Misled Read The Invisible Battle →