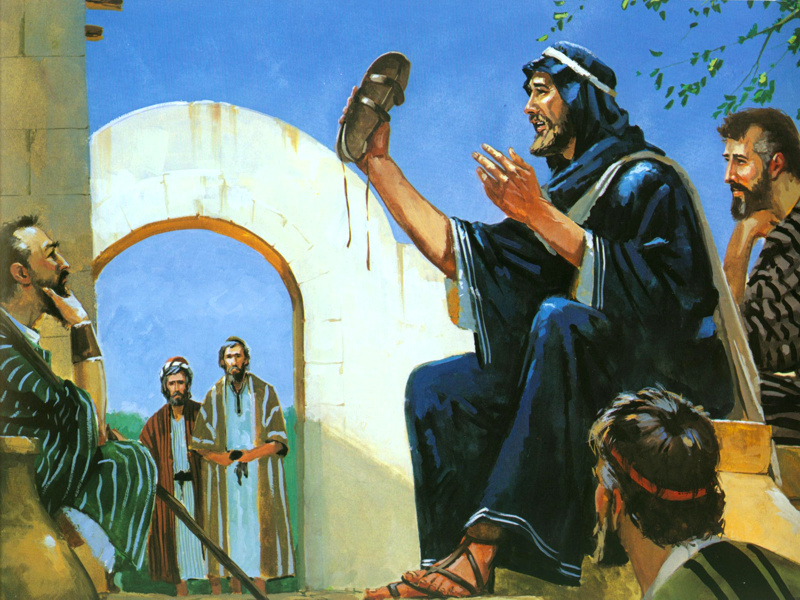 The Book of Ruth is a literary masterpiece. Just as well it is, for if Ruth is placed immediately after the Book of Judges — as is done in the Septuagint and in most Bibles today — then it makes for a refreshing and comforting alternative to the dire ending of Judges. In the Hebrew Bible, however, Ruth is not part of the Law or the Prophets, but forms part of the Writings (Ketuvim), specifically the Megilloth (scrolls) that are read on five holy occasions during the year. The historical events described in Ruth took place in the days when the Judges ruled (Ruth 1:1), but when exactly it happened one cannot say for certain. Whenever Ruth is encountered, however, the heroine of the story does her name proud, for it means ‘refreshment’, ‘comfort’ or ‘friendship’.

The Purpose of Ruth

The most important reason why Ruth was written was probably to defend David’s claim to the throne against the claims of the house of Saul — despite David having non-Jewish blood in his veins by virtue of having a Moabitess great-grandmother (Luter & Davis 1995:16). This may also explain why Ruth may have been written either before or shortly after David became king of Judah, in about 1011 to 1000 BC. A second reason is to present a positive case study within the genealogy of David of the extent of faith’s operation and application, extending to persons of faith outside of Jewish stock (Wechsler 2014:391). Thus God’s grace includes the Gentiles. Third, Ruth was written to show that in times of apostasy during the days of the Judges, God still preserved a remnant in Israel who acted faithful and obeyed the LORD (Fruchtenbaum 2007:279). Fourth, according to the NET Bible (cited by Constable 2016:3), Ruth may be as much about redemption as it is about God’s hand of providence behind the scenes: ‘God cares for needy people like Naomi and Ruth; he is their ally in this chaotic world. He richly rewards people like Ruth and Boaz who demonstrate sacrificial love and in so doing become his instruments in helping the needy. God’s rewards for those who sacrificially love others sometimes exceed their wildest imagination and transcend their lifetime.’ Two more reasons why Ruth was written have to do with the concepts of the Kinsman Redeemer and levirate marriage, as discussed below.

Under the Mosaic Law, the kinsman-redeemer had three obligations. First, if a man had to sell himself into slavery or had to sell his inheritance (land) in order to pay his debts, then his brother (or another close family member) was obligated to pay the debt to redeem the man and/or his land. Leviticus 25 describes the law of redemption. Second, the kinsman-redeemer was to serve as the avenger of family blood (Fruchtenbaum 2007:276). Third, according to Deuteronomy 25:5-10, if a married man died without a son, the kinsman-redeemer was to enter into a levirate marriage with the brother’s widow to perform the duty of a husband’s brother to her, to raise a son to perpetuate the name and inheritance of the deceased. The Book of Ruth portrays these concepts and laws in action. When Boaz buys the land of Naomi, he marries Ruth to raise seed for the deceased. But Boaz actually did more, for he became a type of the perfect antitype. In his humanity the Lord Jesus Christ, the Kinsman-Redeemer, not only redeemed this earth from whatever claims Satan may have gained at the Fall, but Jesus also paid for our sins, thereby gaining a bride. Table 2 shows the requirements for a kinsman-redeemer and compares it to what Christ did.

Table 2: The Requirements of the Kinsman-Redeemer and Messiah’s Qualifications

Comparisons of Ruth with Proverbs 31 and Esther

Table 3: A Comparison of the Woman of Valor and Ruth

Table 4: A Comparison of Ruth and Esther

The Structure of Ruth

The Book of Ruth contains various units set off by shifts in scene, time, characters, speed of action and topic. Different possible structures of the Book of Ruth have been identified (cf. Luter & Davis 1995:21; Dorsey 1999:121-128), but the most convincing proposal seems to be that of Luter and Rigsby (1996:15-28):

What seems to be unusual about Ruth’s structure is that each of the above elements of the structure (A, B, C, C’, B’ and A’) may be itself structured as a chiasm. For example, Luter and Davis (1995:30) identify the following chiasmus for “A” in the structure:

The following chart of Luter and Rigsby (1996:21) shows how beautifully the Book of Ruth has been structured:

The Book of Ruth is one of the most beautiful and important short stories ever written. The German poet Goethe called it ‘the loveliest complete work on a small scale’ ever written; the literary critic Alexander Schroder wrote that ‘no poet in the world has written a more beautiful short story’; and the eminent archaeologist W. F. Albright wrote that ‘the delicacy of the story of Ruth remains unsurpassed anywhere: Ruth’s loyalty to her mother-in-law, the scene between her and Boaz in chapter 3, and the final episode with Naomi (4:14-17) are gems of world-literature’ (all cited by Constable 2016:4-5). But this lovely short story of Ruth also clearly points forward to the Kinsman-Redeemer who on the cross not only bought or redeemed the world, but the Son of David, the Son of Abraham also bought personal redemption with his blood on the cross. There is no greater or more important love story than this.