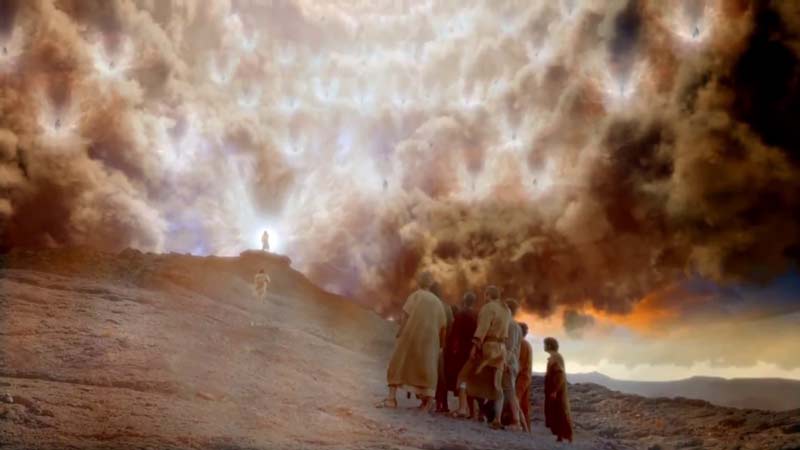 The ascension of Jesus Christ into heaven is not only a historical fact but also theologically highly significant and important. What is the history of the ascension of the Messiah? What theological implications, significance and results can be mentioned regarding Christ’s ascension?

The village of Bethany (Luke 24:50) is on the east side of the Mount of Olives and it is from here that the ascension of the Messiah took place. In a Jewish fashion, Jesus lifted up his hands and blessed his disciples (Luke 24:50). While he was still blessing them, suddenly Christ was carried up into heaven (Luke 24:51; cf. Acts 1:9a). At a certain height, a cloud hid Jesus so that the remainder of Christ’s ascension could not be seen by his disciples (Acts 1:9a). Two angels then told the disciples that the Messiah will return in the same manner as they beheld him (Acts 1:10-11). Note it does not say the same place, the text says that Christ will return to the earth in the same manner. Eventually Christ will put his foot on the Mount of Olives (Zechariah 14:4), but this does not necessarily mean Christ’s second coming to earth will start at that place. According to Fruchtenbaum (2005:4), the place of Christ’s second coming to the earth will be the city of Bozrah, or Petra. When Christ was received into heaven, He sat down at the right hand of God (Mark 16:19; cf. Psalm 110:1).

The ascension of Christ fulfilled Old Testament prophecies such as Psalm 68:18 and answers the question raised in Proverbs 30:4, namely “Who has ascended into heaven, or descended?” Moreover, the ascension fulfilled prophecies that Jesus made (John 3:13; 6:62; 14:2, 12; 16:5) and this is later affirmed by the apostle Paul in Ephesians 4:8-9.

By considering the various Greek words used to describe the ascension of Christ, one learns that the ascension was like taking a journey or a trip, with a departure (from the earth), a gradual journey (in the clouds) towards a destination (heaven, specifically at the right hand of God the Father). Importantly, the whole person of Jesus Christ ascended into heaven, thus it was bodily and for a while Christ’s disciples could see Him.

Twelve reasons why the ascension is so significant and important can be noted:

1. Jesus prophesied that He would go to the Father and the ascension proved He did (John 14:28).

2. Jesus is now preparing a place in heaven for believers (John 14:2).

3. The ascension marks the culmination of Christ’s exaltation, which began with His burial in a rich man’s grave (cf. Ephesians 1:20-23).

4. His ascension marks Christ’s headship over the Church (Colossians 1:18).

6. Christ’s ascension began his High Priestly ministry according to the order of Melchizedek.

8. The ascension is significant because it makes Christ a forerunner into heaven (Hebrews 6:20), the first of more to come later.

9. The Messiah’s ascension marks believers’ new position as being seated in the heavenlies (Ephesians 1:20-21).

10. By means of the ascension, and only after Christ had ascended into heaven, did Christ give spiritual gifts to believers via the Holy Spirit (Ephesians 4:7-11).

11. The ascension provides the manner (not the place) of Christ’s return to the earth, namely on the clouds (Acts 1:9-11).

12. When Christ ascended into heaven, He took the souls of Old Testament saints with Him into heaven (Ephesians 4:8).