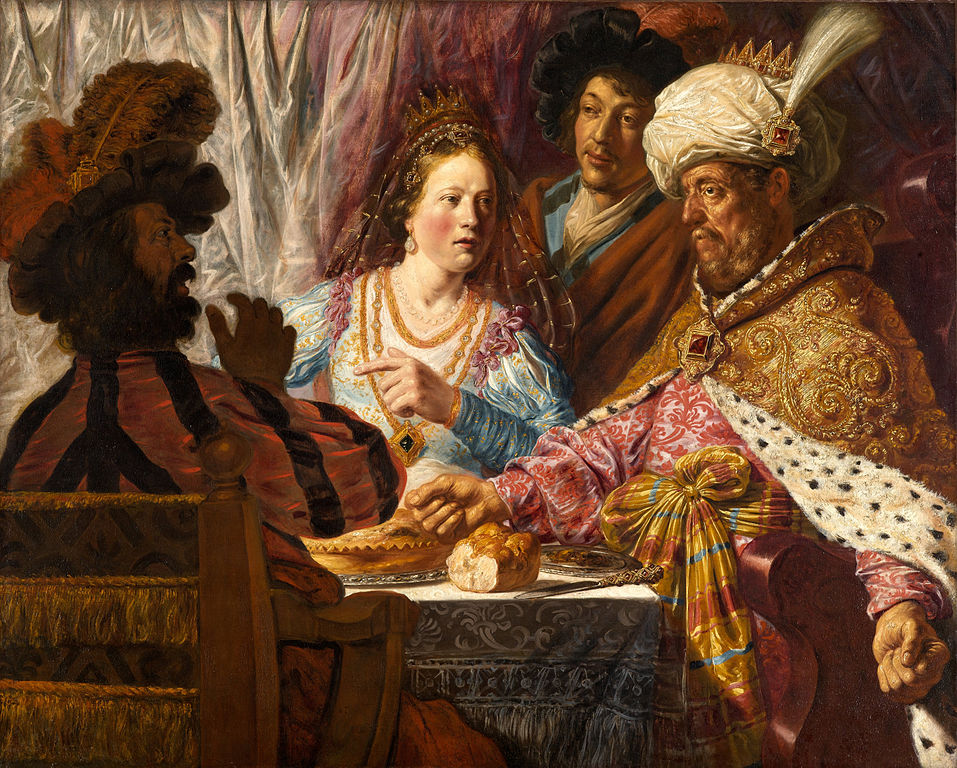 The Book of Esther

There may be a good reason why Esther is the only book in the Bible that does not explicitly mention God. If Israel failed to keep the Mosaic covenant, God said (or threatened) that one consequence would be that that He would hide his presence, or ‘face’, from them (Deuteronomy 31:17-18; Isaiah 59:2). According to the Moody Study Bible (2014:682), this theme of God hiding His “presence” can be seen in the ‘unmistakable similarity between the name of the book’s central protagonist — ‘ester (“Esther”) — and the phrase by which God expressed His threat — ‘astir (“I will hide”; Dt 31:18; cf. Ezk 39:23-24). Moreover, the Hebrew consonants of these two terms makes them almost identical, as the name “Esther” was ‘str and the phrase “I will hide”, ‘styr. This similarity, as a reminder that God (both in name and in deed) is meant to be hidden in the book, was recognised and affirmed early in Jewish interpretive history, as attested in the Babylonian Talmud Chullin 139b’. Israel had failed to keep the Mosaic covenant, resulting in the Babylonian captivity, but thereafter many Jews chose not to return to their land. God was hiding His presence or face in the Book of Esther, but His faithfulness to his unconditional promises, specifically those of the Abrahamic covenant, is plain for all to see.

Some people think that Mordecai is the author of the Book of Esther, but the ‘highly commendatory way in which he is presented (cf. 6:11; 8:15; 9:4; 10:3) makes this hardly likely’ (Merrill 2011:357). The writer seems to distinguish himself from Mordecai in 9:20, 23. ‘The idea that the writer was Esther has not found support mainly because female writers were uncommon in ancient patriarchal societies such as Israel’ (Constable 2017:1). We know that the Holy Spirit inspired this book, but the human author remains unknown. What is certain, however, is that the human author was familiar with the Persian culture and literature (2:23; 10:2) and wrote as if he was an eyewitness of the events (Constable 2017:1). The last historical events of the book (9:27-28; cf. 3:7) can be dated since the Jews defended themselves and instituted the Feast of Purim in 473 B.C. The Book of Esther was probably written shortly thereafter, in about 470 B.C.

The Book of Esther is a narrative that vividly describes actual historical events. ‘It is a short story or novella, a description that in no way undercuts its facticity or historicity’ (Merrill 2011:356). The exposition of the plot of the drama explains how Esther became queen in place of Vashti. Shortly thereafter, Mordecai uncovers a plot to murder the king — an event initially almost forgotten — and then Haman devises a plot to exterminate the Jews. This challenge results in Esther risking her life to save her fellow-Jews. The turning point comes one night when the king could not sleep. As the first of many ironic reversals, Haman loses his life the very next day but Mordecai is honoured for uncovering the assassination plot. The evil plan to exterminate the Jews is countered. The book starts with a feast in a Persian capital city, a feast that did not end so well, but the book of Esther ends with the commemoration of the joyous Feast of Purim that is kept to this day by Jews all over the world. Just like the Book of Ruth, the Book of Esther is a beautiful short but true story. While admitting that sections E and E’ (see below) may be weak matches, the following chiastic structure of Dorsey (1999:163) can be commended:

It is true that the sovereign God is working providentially behind the seen (or scenes) to work out all things for good for those who are called according to his purpose (Romans 8:28). But as per the Moody Study Bible (2014:681), the goal of Esther may be to express the faithfulness of God — ‘all the more so, since the beneficiaries of His faithfulness, Israel, are in the land of their exile on account of their sins. God is faithful in upholding His unconditional covenant with Abraham (Gn 12:1-3; Jr 31:36; Zch 3:9; 12:10) and to “all families of the earth” (Gn 12:3; Gl 3:8). The latter is seen in the mass conversion by Gentiles from multiple ethnicities in Esther 8:17’. Rossow (1987:229-230) highlights another purpose: ‘I would submit that the Book of Esther suggests even more than the providence of God that has traditionally been discovered in it. It pays tribute to the symmetry of His nature and to the artistry of His actions. …The symmetry and the design of the Book of Esther are those of the divine Author, not of the human author. Thus God is a God of design, of symmetry. …As much as (or more than) any other book of the Bible, the Book of Esther brings this attribute of God to our attention’.

If the Book of Ether is a book in which God hides His presence or face and yet is fully active behind the scenes (or the ‘seen’), then one can probably expect various typological connections. If all of Scripture teaches about Christ (Luke 24:27), then it is reasonable to expect such connections, even if they are indirect. Moreover, Colossians 2:16-17 teaches that Israel’s holy days — and this includes the Feast of Purim — are shadows that point to the substance which belongs to Christ. We are not focusing now on parallels between other times when Israel was outside of their land, like when Joseph was used by God to intervene for Israel (Genesis 37-50), or Israel’s exodus and deliverance from Egypt compared to Esther’s interventions on behalf of the nation. Instead, in an insightful article, Wechsler (1997:284) highlighted the following shadow-substance comparison between Esther and Christ:

Although some critics want to do it, there is no reason whatsoever to exclude the Book of Esther from the Scriptures. In fact, there is significant danger for those who want to tamper with God’s Word (Deuteronomy 4:2; Revelation 22:18-19). The Book of Esther teaches the faithfulness of God who, while hiding His presence or face from the Jews because they failed to keep the Mosaic covenant, still works behind the seen to fulfil His unconditional promises. God is working for the benefit of the Jew first but also for the Gentile (Esther 8:17; 9:24-26). You see this in the shadows of the Book of Esther which point to the substance which belongs to, or is, the Lord Jesus Christ.