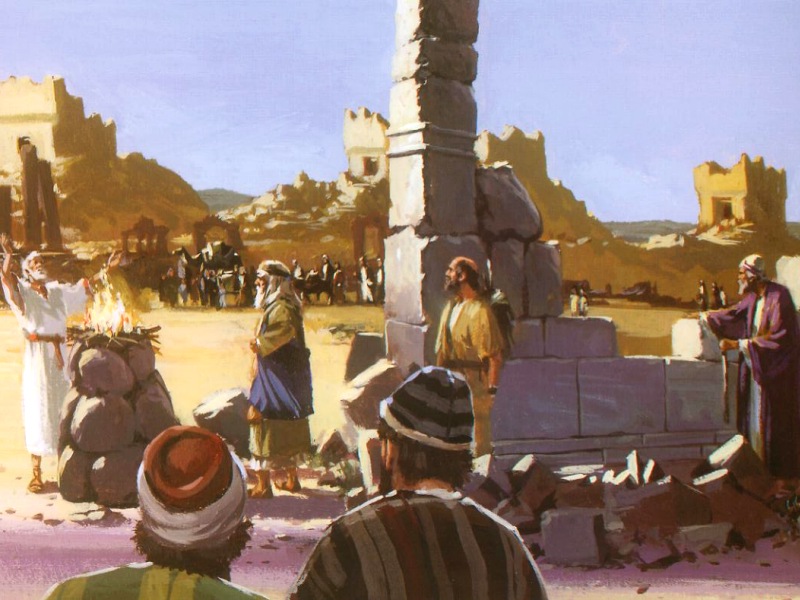 The Book of Ezra-Nehemiah

Today, most Bibles show Ezra and Nehemiah as two separate books, but this was not always the case. The most ancient manuscripts, the Hebrew Bible before the 15th century, and the Septuagint all viewed Ezra and Nehemiah as one composition (cf. Merrill 2011:343; Constable 2017a:1). Philo and Jerome were the first to separate these two books. Since about the 15th century, the Hebrew Bible has also split this composition into two separate books. But if one considers the structure of Ezra-Nehemiah, it becomes clear that it is one composition.

The above structure shows quite well the repetition of the names of people who returned to the land of Israel (sections A and A’), the opposition to rebuild the temple and then later the opposition to rebuild of the walls of Jerusalem (sections B and B’), first-person accounts of the returns of Ezra and Nehemiah (sections C and C’) and — in the centre of the proposed chiastic structure — the purification of the people.

Having provided a structural overview, what is this composition of Ezra-Nehemiah about? A major theme that the above structure clearly highlights is the return of the Jews to their homeland after the Babylonian captivity (Dorsey 1999:161). But perhaps more importantly, it also shows that the Jews who physically returned to the land of Israel also needed to return spiritually to God. Merrill (2011:351) states it well: ‘If God’s covenant promises were to find authentic fulfilment, the regathered and reconstituted Jewish state must conform in all its aspects to its covenant mandate and responsibilities’. This typologically points to yet a future Jewish generation who will call on the Lord Jesus not only to return (Hosea 5:15-6:3; Zechariah 12:10; Matthew 23:39), but also to set up the messianic kingdom. For these reasons, one should not be surprised to find in Ezra-Nehemiah themes such as the rebuilding of the temple and the walls of Jerusalem, purification, Israel as a holy and elect nation among the other nations, and opposition to such initiatives.

If Ezra-Nehemiah is one composition, who wrote it and when was it written? This difficult question is typically answered in one of three ways. Some say Ezra wrote Ezra-Nehemiah, some say Ezra wrote Ezra and Nehemiah wrote Nehemiah, whereas a third view is that a separate chronicler combined the first-person accounts (Ezra 7-8; Nehemiah 1-2) with other material into one, structured composition. If Ezra wrote all of this, then a possible date could be 446 B.C. or shortly thereafter (Constable 2017a:2). If Nehemiah had a hand in writing, then he may have written sometime after 423 B.C but not later than 400 B.C. (Constable 2017b:1). If a chronicler was inspired to write, then we can only say this must have occurred after the last historical reference point (Nehemiah 12:22), i.e. after 423 B.C.

To the original audience, Ezra-Nehemiah reminded the Jews that they would yet have national influence. To those few Jews who returned to the land, some of the messianic prophecies mentioned in Haggai, Zechariah and Malachi, may have sounded somewhat unlikely. But God wants to restore the Jews to their homeland, not as an end, but to use Israel as a vehicle of blessing to other nations. Within this elect and chosen nation, the priestly tribe of Levi must represent Israel before God (Fruchtenbaum 1989:820), but as a kingdom of priests, Israel must represent the other nations before God (Ex 19:5–6). This cannot be done, however, unless Israel returns to God, becomes a saved nation, has a functioning temple and a rebuilt Jerusalem, and with the King of the Jews ruling over them. That this will indeed still happen in future, is clear from prophecies such as Isaiah 59:20-21 and Romans 11:25-27.

The application for today starts to commend itself. Ezra-Nehemiah teaches many lessons that the original audience had to apply as they waited for the Messiah’s first coming, lessons concerning faith, sanctification and overall purity. Jesus made it clear in the Olivet Discourse (Matthew 24-25; Mark 13) that until his second coming, the Lord expects his followers to watch, to be ready and to be prepared as we labour faithfully for Him in these last days. With God’s help, we can (again) do this from today onwards.