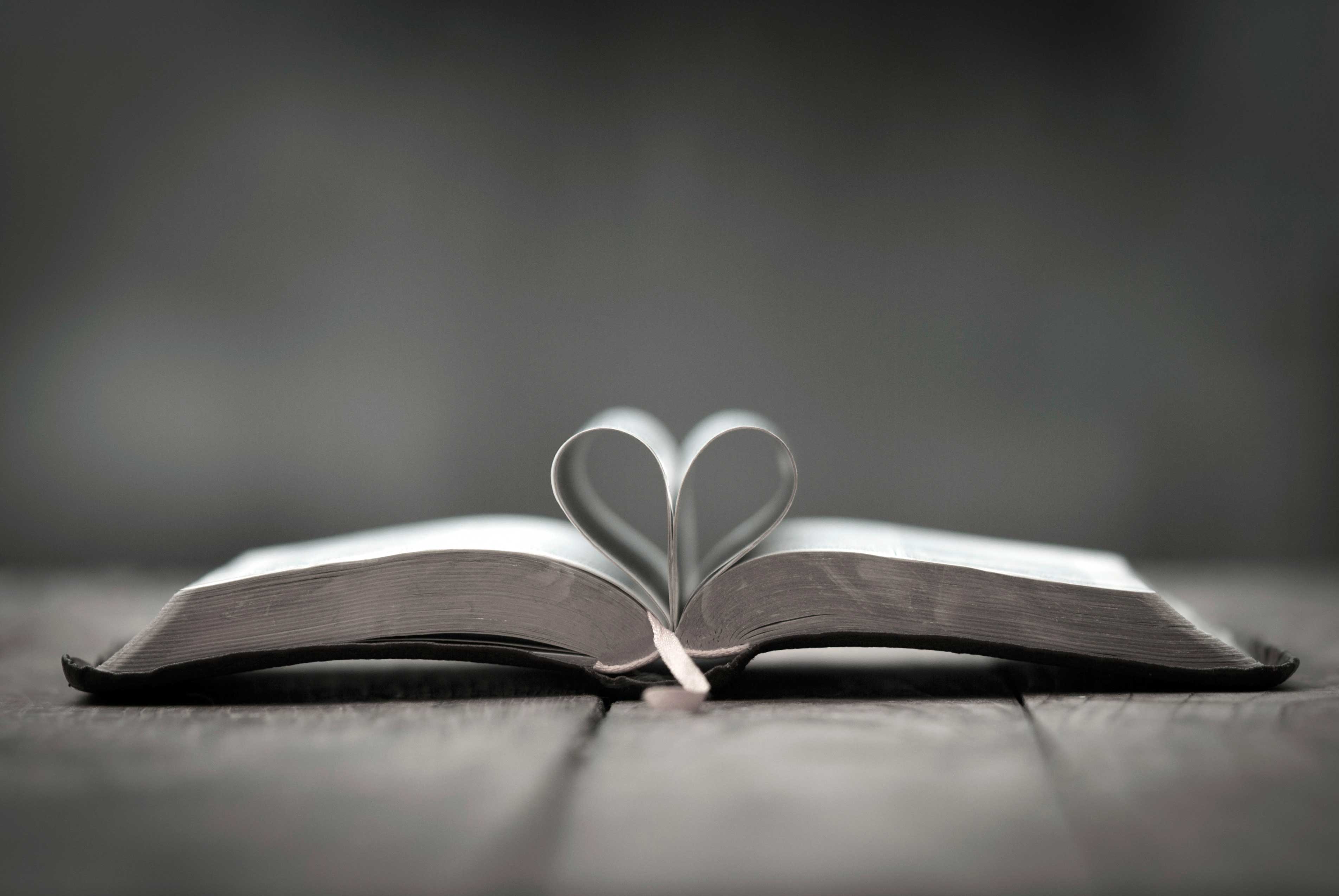 The Book of Malachi

This remarkable book was written almost 2 500 years ago to Jews who had returned to Israel after the Babylonian captivity.

Having heeded the prophets Isaiah and Jeremiah, they had entered the Promised Land. The temple and the walls of Jerusalem were rebuilt. But the most vital part of the restoration was lacking: many had lost their love for and fear of the LORD of hosts. Ezekiel’s temple will ultimately be built in the city of the great King. Elijah the prophet will eventually restore the hearts of the fathers to the children and the true remnant will enter the Messianic kingdom. This remarkable book remains applicable not only to the Israel of God, but to all who seek the Lord, the Messenger of the covenant, who will soon return.

Nothing is known about the person who wrote this book; no one else in the Old Testament had this name. Many understand “Malachi” (1:1) to be a title rather than a name. “Malachi” means “my messenger” or “the messenger of Jehovah” (Malachiyyah). The Targum, an ancient Aramaic translation and paraphrase of the Old Testament, ascribed this book to Ezra; the Talmud said Mordechai wrote it (Constable 2017:1). But this is unlikely, because if Malachi was not the prophet’s name, it would be the only prophetic book in the Old Testament that was written anonymously or pseudonymously (cf. Archer 1964:415). Malachi is not referred to in the third person pronoun (“his”), but rather as “my” messenger (Kaiser 1984:13). The “messengers” in this book are understood to (also) have a human nature (1:1; 2:7; 3:1). Even though he had an unusual name, Malachi must have been a real person, one of three post-exilic prophets that God inspired to write.

Internal clues help to estimate the date when this book was written. The LORD of hosts asks the priests, who were offering blind, lame and sick animals as sacrifices, whether they would present these to their “governor” (Malachi 1:8). This word is pehah, a Persian title (cf. Ezra 5:3, 6, 14; 6:6-7; Daniel 3:2-3, 27). 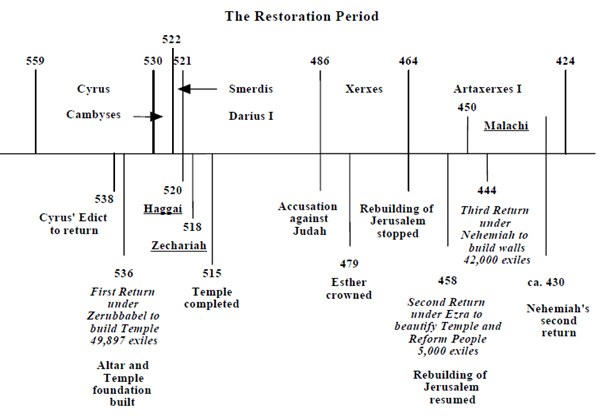 In the second half of the fifth century BC, the times of the Gentiles had progressed to the second of the four Gentile empires. During the same night that the handwriting on the wall appeared, in 539 BC, the Persians captured Babylon (cf. Daniel 5). The Persian Empire existed until 333 BC when Alexander the Great captured Babylon.

Cyrus’ edict allowed the Jews to return to Israel in 538 BC (cf. Isaiah 45). During the next 20 years or so, 49 897 exiles returned with Zerubbabel and Joshua to the land (Ezra 2:64-65; Haggai 1:1). Later, more Jews returned with Ezra (458 BC) and then with Nehemiah (444 BC). Haggai and Zechariah were prophets for Zerubbabel, but Malachi was a prophet for Nehemiah (Fruchtenbaum 2005:5). Malachi’s audience is the Jews who had returned to Israel; the locale was most probably Jerusalem.

The circumstances in Israel at the time were difficult. Initially, the returning exiles rebuilt the temple but would later experience severe opposition to rebuild the wall (Nehemiah 4:1-6:19). The Jews had to be taught the Law of Moses all over again (Nehemiah 8:8). At the time of Malachi, the temple had been rebuilt but it did not have the splendour of Solomon’s temple (cf. Haggai 2:3). There were locust plagues and the harvests were poor (Malachi 3:11). It is, however, the spiritual condition of the people of Israel that Malachi was especially addressing.

Israel may have had in her midst sorcerers, adulterers, false witnesses and those who treated their workers badly (cf. Malachi 3:5). “A nation that is prepared to serve God with sacrifices that they will not dare to offer to their heathen governor (1:8) is a nation that has lost its perspective of God as their Father and Lord (1:6)” (Verhoef 1987:160). The spiritual, ethical and moral tone of the nation was quite low (Constable 2017:4).

Even though some of the rituals of the temple were being adhered to in accordance with the Law of Moses, this was ritual without reality (cf. Fruchtenbaum 2005:5). God rebukes this formalism. It is this cold and dead formalism that would develop over the next four centuries into the “traditions of the elders” that would be elevated above God’s Word (cf. Matthew 15:2).

The Jews considered Malachi to be the “seal of the Prophets” or, “the last among them” (Verhoef 1987:153). Malachi was also the last of the twelve Minor Prophets. God did not use another messenger until — more than 400 years later — John the Baptist thundered, “Repent, for the kingdom of heaven is at hand” (Matthew 3:2; cf. Isaiah 40:3; Malachi 3:1a).

Literary Form and Structure of Malachi

How does Malachi convince his Jewish audience that God not only loves them, but that they have sinned and are not in fellowship with God? As noted, Malachi confronts his audience through the frequent use of questions and answers. “Essentially, the Israelites disputed God’s love, His name, and His will concerning marriage and divorce, His justice, His demands regarding stewardship, and His service” (Constable 2017:7). Malachi’s rhetorical approach moves from God’s statements to their objections and then all the way back to God’s answers. The following chiastic outline noted by Constable (2015:7) captures how the oracles recorded in Malachi are carefully structured:

There is little doubt that Malachi is a hortatory discourse that “attempts to affect the future behaviour of someone” and thus it consists of the “essential features of problem, command, motivation, and authority” (Clendenen 1987:6). Viewing Malachi as such a hortatory discourse, Clendenen (1987:7, 16) proposes a structure for the book that outlines three chiastic movements or embedded discourses, as shown below:

According to Kaiser (1984:11), the Jews that returned to Israel may have expected a glorious temple (cf. Ezekiel 40-48; Haggai 2:9), a fruitful and blessed land (cf. Ezekiel 34:26-30), a large population (Isaiah 54:1-3) and the reign of the Messiah (cf. Jeremiah 23:5-6). Certainly the book of Haggai closed with a prophecy that the strength of the Gentile kingdoms will be destroyed (2:20-23). The book of Zechariah likewise ends with a wonderful prophecy of the reign of the King, the LORD of hosts from Jerusalem (14:16-21). The Jews had (and still have!) reason to have great expectations and hope.

But this is not what one encounters in Malachi. Spiritual lethargy had set in. God’s love was doubted (Malachi 1:2-5). A corrupt and defiled priesthood existed (Malachi 1:6-2:9) and the people were likewise sinning (Malachi 2:10-16), even questioning God’s justice (Malachi 2:17-3:6). They neglected the Law of Moses (Malachi 3:7-15). The land was producing poor harvests (Malachi 3:11) and only a few Jews truly feared the LORD (Malachi 3:16-18). The altar, the temple and the walls of Jerusalem had all been rebuilt, but Israel’s relationship with God was still broken. If Israel does not turn to the LORD of hosts, God’s judgment in the Day of the LORD will overtake them (Malachi 3:2-5; 4:1-6).

God takes the initiative, wanting to restore this relationship. Out of 55 verses in Malachi, 47 record a first person address of the Lord. Malachi frequently refers to God as the “LORD of hosts” or, in Hebrew, “Jehovah Saboath”. (The name “LORD of hosts” appears 80 times in Jeremiah in connection with national judgment. In the post-exilic prophets, “LORD of hosts” appears 14 times in Haggai, 50 times in Zechariah and 25 times in Malachi.) The name “Jehovah” (or “LORD”) emphasises God’s covenant-relationship with Israel as its Redeemer (Exodus 19:3; Jeremiah 31:31-34; cf. Verhoef 1987:181). God is thus the Father of Israel (Malachi 1:6; 2:10). But God is also the LORD of (warrior) hosts, where the word “hosts” is related to heavenly bodies, angels, saints, and sinners (Scofield 2002:382). God is King and his Name should be revered (Malachi 1:5, 11, 14; 2:2). By combining two title-names of God — the LORD of hosts — Jehovah Saboath stresses that He is the Covenant-Redeemer-Father-King of Israel.

This book emphasises God’s unchanging love for Israel: “I have loved you” (Malachi 1:2) combined with “I the Lord change not” (Malachi 3:6). Paul would later quote Malachi 1:2-3 in Romans 9:13 to show that, despite Israel’s sins and infidelities, God’s love for Israel will never change. “The primary thought in Malachi is that of the unfailing grace of God to a calloused and ungrateful and unfaithful people” (Coupar 2015:2).

In Malachi, the audience’s response is clearly not exemplary. When God makes a statement, the audience would object (“How have we…?” — 1:2, 6: 2:14, 17, 3:8-9, 13-14) and then God would answer. Israel’s objections show hard heartedness, human failure and a worship that is somehow lacking. “The condition of the people is revealed in a curious way by seven questions being asked throughout this prophecy” (Coupar 2015:1). Through these questions, God reveals the spiritual condition of Israel at the time. (The Church, local churches and individual believers must heed the warnings in 2 Peter & Revelation 2-3: don’t regress into spiritual lethargy as Israel did (Malachi 1-4; cf. 1 Corinthians 10:1-15).) However, as is common to most prophets, some of Malachi’s prophecies refer to his contemporaries whereas other prophecies refer to a future generation of Jews.

Among the remnant of the Jews that returned from Babylon, there was a smaller remnant that feared the LORD (Malachi 3:16; cf. Romans 9:6-7). This fear “is the term that throughout the Old Testament refers to someone’s reverence for the Lord that arises from awareness of His love, on the one hand, and of His wrath, on the other” (Constable 2017:11). Responding to God’s love, the Israel of God feared the LORD and revered his Name (cf. Malachi 1:6; 2:5; 3:5, 16: 4:2). The true remnant not only had fellowship with God restored, but they also had fellowship with each other (Malachi 3:16). Their names are recorded in the book of remembrance.

The true remnant also had hope in the coming Messiah, whose righteousness will dawn on the earth like the rising sun (cf. Malachi 4:2; Titus 2:13; 2 Peter 1:19). The Day of the LORD will have commenced before the Second Coming of the Lord Jesus Christ. But before that great and awesome Day of the LORD, Elijah the prophet will return to bring about the final and complete restoration of Israel (Malachi 4:5-6; Matthew 17:11; Scholtz 2016:4-5). At that time, the remnant will heed the forerunner’s message and all Israel will be saved (Jeremiah 31:31-34; Romans 11:25-27).

The theme of Malachi may be stated as: “Appreciating God’s constant love is the key to revitalizing present spiritual life and assuring future divine blessing” (Constable 2017:12). Kaiser (1984:13) describes the theme thus: “God has, and continues, to love us, and no amount of doubting, objecting, or arguing the contrary will remove this fact”. Archer (1964:416) says the theme is about “that sincerity toward God and a holy manner of life [that] are absolutely essential in the Lord’s eyes… Israel must live up to her high calling as a holy nation and wait for the coming of the Messiah, who by a ministry of healing as well as judgment will lead the nation to a realization of all her fondest hopes.” The title of this study emphasises that a Jewish remnant will indeed delight in the Messenger of the covenant (cf. Malachi 3:1, 16; 4:5-6).