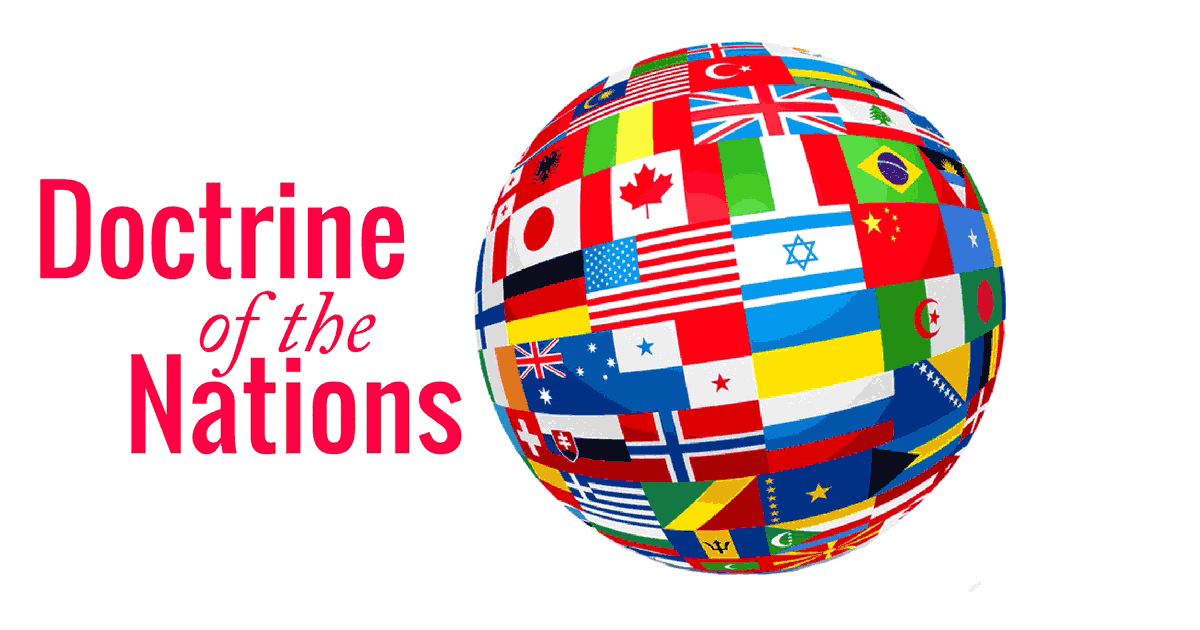 The Doctrine of the Nations

The 70 Nations Prior to Babel, Plus Israel Thereafter

The reference to nations occurs for the first time – and certainly in a positive sense – in Genesis 10:5, 20, 31 and 32 (Scholtz 2017:4). Notice that is it God who made from one man (Adam) every nation (Acts 17:26). Seventy nations biologically descend from the offspring of Shem (26 nations), Ham (30 nations) and Japheth (14 nations). Even though nations only developed after the fall of man and after the great flood, there is no indication that the concept of different nations is unspiritual or wrong; in fact, it is very much part of God’s plan (Deut 32:8–9; Acts 17:26; Vlach 2010:169). At the tower of Babel (Gen 11), the 70 nations were judged for their rebellion against God. It is in this context that God created a new nation through one of Shem’s descendants: the nation Israel. Wright (2006:455) writes: ‘God’s mission is what fills the gap between the scattering of the nations in Genesis 11 and the healing of the nations in Revelation 22’.

Barrick (2012:177-178) identifies two chiastic structures that provide an overview of God’s mission through the kingdom plan (and such plan includes the nations). Figure 1 shows that God created the heavens and the earth, set man to rule over the earth, but man then fell, resulting in the earth being cursed. However, God immediate announced the first Messianic prophesy (Gen 3:14-15): Messiah will not only provide redemption from sin, but He will also destroy any claims that Satan may have. The victory has already been won on the cross, so the curse will be lifted, the God-man Jesus Christ will rule over the earth and God will create a new heaven and a new earth.

Figure 1: Chiastic Structure of the Kingdom Program in Scripture

A second structure of Barrick (2012:178), i.e. Figure 2, highlights the effect of sin and judgement, but again, nothing can thwart God’s plans for His creation.

Figure 2: Chiastic Structure of the Anti-Kingdom Program in Scripture

Israel’s Role in God’s Plan for the Nations

Israel is comprised of the descendants of Abraham, Isaac, and Jacob — or, to put it succinctly, the descendants of Jacob (whose name was changed to ‘Israel’). This definition of Israel has not changed in the New Testament or during the Church age. Why did God elect Israel as the chosen nation? The basic answer is that Israel will glorify God by being used as a blessing to the other nations. How will this be achieved?

Within the elect and chosen nation, the priestly tribe of Levi must represent Israel before God (Fruchtenbaum 1989:820), but as a kingdom of priests, Israel must represent the other nations before God (Ex 19:5–6): ‘[Israel’s] role henceforth would be to mediate or intercede as priests between the holy God and the wayward nations of the world’ (Merrill 2008:98). In the Old Testament, after Israel had made sacrifices for itself as part of the Day of Atonement, next followed the feast of Tabernacles: Levites had to offer 70 sacrifices for the 70 nations. When Christ returns to establish the Messianic kingdom, nations will come to Jerusalem to worship the King, the LORD of hosts, and to keep the Feast of Tabernacles (see Zech 14:16-21; cf. Mt 17:4).

God used Jews to write the books of the Bible (Rom 3:2). Moreover, God will establish his kingdom plan in accordance with unconditional covenants that were made with Jews (such as the Abrahamic, Land, Davidic and New covenants). Note that only the believing remnant of Israel, i.e. Jewish believers of all time, will enter the Messianic kingdom when Christ comes to establish it.

Another reason why God chose Israel as the elect nation is because salvation is of the Jews (Jn 4:22). Again, all humans, Jews included, must put their faith in Christ for salvation (cf. 1 Cor 15:1-4). But it is through the Jewish Messiah that God provided salvation, and this same Christ will rule over the nations.

Someone might say that Jews are not in and of themselves so special. It is true that Israel has stumbled — but are the North Korean and British nations, to name but a few, obeying God? While Israel is by no means perfect, God’s gifts and calling are irrevocable (Rom 11:29). Eventually, the Jews that survive the Tribulation Period will all turn to Jesus their Messiah, they will call on Him (Hos 5:15-6:3; Mat 23:39) and they will enter the Messianic kingdom as a saved nation (Is 59:20-21; Rom 11:25-27).

How Should a Nation be Defined?

What is the sine qua non of nations, the essential characteristics without which there cannot be a nation? Before trying to answer this question, keep in mind that there is only one human race. Moreover, except for Jesus, all human beings are born (in Adam) with a fallen nature. It is therefore completely absurd for one people group to think they are better than another people group, for why elevate your fallen nature above the fallen nature of another people group? How about believers who have been born again (in Christ, the Last Adam), who now also have a new nature, do you think you are better than others? Perish the thought, let no one boast, for we can only boast in the Lord Jesus Christ.

One ought not to unthinkingly extrapolate some of God’s rules and promises for Israel, the chosen nation, to all other nations. Another risk is to mix dispensational distinctives. For example, under the Law of Moses, Jews do not intermarry with other people-groups so that they won’t forsake God to worship useless idols (Deut 7:3-4). But as far as I am aware, people of other nations are not prohibited from marrying persons from a nation not part of their own. Moreover, regarding different dispensations, a believer today may marry a Jewish or a non-Jewish person, provided that spouse is also a believer. Nevertheless, despite the qualifications noted above, the nation Israel is biologically-ethnically defined as comprised of the descendants of Jacob. Israel is God’s elect nation and it is to the Jewish nation that God has given the unconditional covenants (Rom 9:4; Eph 2:12). It is wrong to unthinkingly extrapolate promises given to Israel to all the other nations.

So again, how does the Bible define a nation? The following may be noted:

How is Satan Trying to Thwart God’s Plan for the Nations?

Christ has already won the victory on the cross, Satan’s doom has already been announced (cf. Mat 25:41), but this sentence has not yet been executed. Until Christ’s second coming, the kingdoms of the world — and this certainly includes nations — are still under Satan (cf. Mat 4:8-9). For now, the prince of the power of the air is still deceiving the nations (Eph 2:2; Rev 20:3). For now, Satan is still the god of this world who blinds the minds of unbelievers so that they will not see the light of the glory of the gospel of Christ (2 Cor 4:4). As the end of this age draws nearer when Satan will manifest his rule through the Antichrist, we can already see boundaries between nations being broken down, nations giving up their political organisations to become part of larger ‘power blocks’, we already see the destruction of languages and we mourn the ruin of nations’ unique cultures. But the Lord will consume the lawless one with the breath of His mouth and with the brightness of His coming (2 Thes 2:8). The dragon and his angels will be thrown out of heaven, and Satan will be bound in the bottomless pit for a thousand years (Rev 12:9; 20:1-2). For the kingdoms of this world will become the kingdoms of our Lord and of His Christ, and He shall reign forever and ever (Rev 11:15)! Satan wants to usurp God’s plan, position and glory, but this created and fallen cherub has already been defeated, and his sentence will certainly be executed.

When Christ returns, He will judge the nations (Joel 3:1-3; Mat 25:31-46) before establishing the Messianic kingdom. God will be glorified through the nations that He created, first through Israel but also through other nations (cf. Is 19:19-24). After the final rebellion and the great white throne judgement, the Messianic kingdom will merge into the eternal state. In the eternal state, Israel and the nations who are saved shall walk in the light of the glory of God, and the kings of the earth shall bring their glory and honour into the New Jerusalem (cf. Rev 21:22-27).