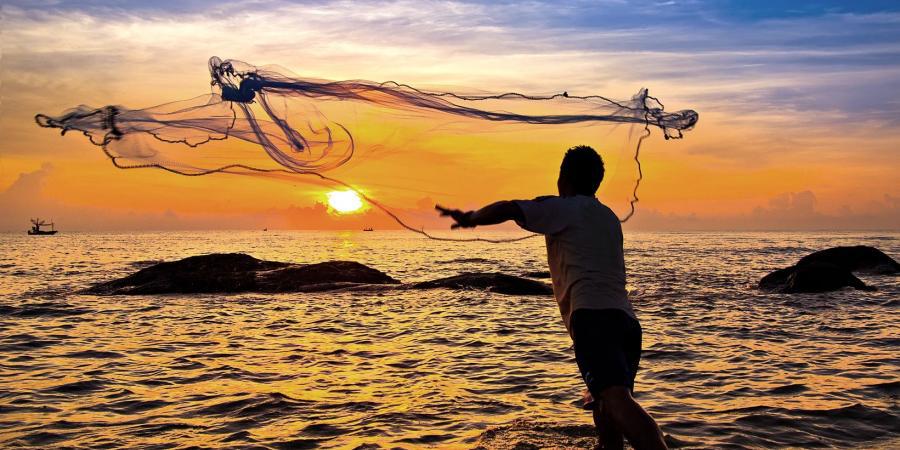 The Parable of the Dragnet

The parable of the dragnet (Mat 13:47-50) is another unique Matthean parable and the third in Matthew 13 that receives an explanation (Mat 13:49-50; cf. 13:18-23; 13:36-43). But just because the parable has received an explanation does not mean one should not think through it. Why are there many similarities — but also differences — between the parable of dragnet and the parable of the tares in the field? When will the dragnet be cast into the sea to gather fish from every kind? What is the mystery of the kingdom that this unique Matthean parable teaches? ‘Again, the kingdom of heaven is like a dragnet that was cast into the sea and gathered some of every kind, which, when it was full, they drew to shore; and they sat down and gathered the good into vessels, but threw the bad away. So, it will be at the end of the age. The angels will come forth, separate the wicked from among the just, and cast them into the furnace of fire. There will be wailing and gnashing of teeth’ (Mat 13:47-50)

The following literary structure of Matthew 13 may be proposed:

The dragnet-parable and the parable of the tares of the field are not only chiastic parallels (see D and D’), but also share many similarities. For example, the interpretation in Matthew 13:49-50 is like the interpretation in 13:40-43: verse 49 is like verse 41, and verse 42 is identical with verse 50. Both depict a sorting — tares or bad fish — just before judgement. Whereas the parable of the tares in the field is the first of a triad (Mat 13:24-33), focusing on seeds and harvest, the parable of the dragnet is the last of a triad (Mat 13:44-50) which, in contrast to the two parables preceding it, ‘is concerned with securing many items (fish) rather than just one item of value’ (Bailey 1999:282). As discussed later, whereas the tares are only removed at the end of a long process that culminates in the harvest, in the case of the dragnet the process seems to take only a short while.

Instead of the agricultural scenes depicted earlier (Mat 13:3b-9,24-30,31), the scene portrayed here is of a dragnet being pulled through the sea. Using a dragnet results in an indiscriminate and mixed catch of all kinds and sizes, edible and inedible, saleable and useless. Dragnets are too large to be emptied in a boat and must therefore be drawn to shore. Once on shore, the different kinds are sorted into only two categories: the good are gathered into vessels but the bad (or ‘worthless’) are thrown away.

Who will authorise the mission described in the parable of the dragnet? Given that the transitional statement in Matthew 13:49a is identical to Matthew 13:40b, both of which refer to the end of this age, it seems reasonable and consistent to ascribe the authoritative sending of the angels in Matthew 13:41 and that of 13:49-50 to the Son of Man.

According to Scholtz (2014:5), and in line with Matthew 10, the gospel of the kingdom is preached during two periods: the first preaching of this gospel only to Israel occurred during Christ’s First Advent (Mat 10:5b-15) and the second such preaching will take place during the Tribulation Period immediately prior to Christ’s Second Advent — and then the end will come (Mat 10:16-42; cf. 24:14). The Tribulation Period is a period of seven years immediately preceding the return of the Son of Man, comprising two consecutive periods of 3,5 years each. The eschatological timeframe that the parable of the dragnet covers appears to be the Tribulation Period immediately prior to Christ’s Second Advent.

The parable of the dragnet focuses on the international mission to bring the gospel of the kingdom to Israel and the nations during the Tribulation Period. Other revelation shows that the Son of Man will send Jewish missionaries to preach the gospel of the kingdom not only in Israel but to the entire world as a witness to the sea of all nations — and then the end of this age will come (cf. Mat 24:14). At the end of the Tribulation, the last of the Gentile empires will be destroyed by the stone cut out of the mountain, but not by human hands (Dan 2:44-45). Also at the end of the Tribulation, the Holy Spirit will be poured out over all of Israel, and it is this restored and saved nation that will in faith call on the Lord to return (Hs 5:14-6:3; Zch 12:10; Mt 23:39). With the dragnet drawn in, the nations will be judged, the enemies of Christ will have been made his footstool and the wicked will be excluded when the Messianic kingdom is established on earth. Bailey (1999:288) states it well:

To people who have not yet exercised faith in Christ: accept the gospel of grace now and look forward to meeting the Lord in the air, instead of awaiting the wrath of God which is certain to fall on the earth dwellers and an increasingly evil world. To believers (the ‘good fish’): if the Lord tarries and opportunity exists, believers should serve Him and obey the great commission while watching and being ready, for we do not know at what hour the Lord is coming.