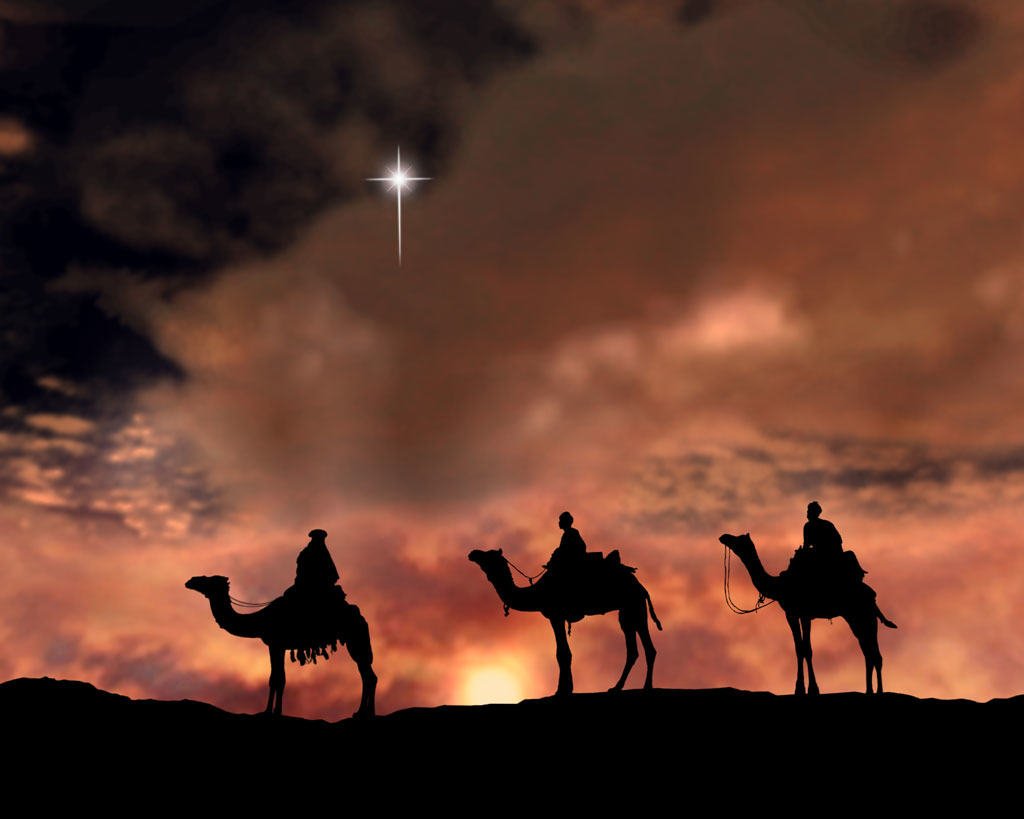 The Star of the King of the Jews

The journey to Jerusalem is wearisome, but worth it. We travel north-west, all the way up to the Euphrates River to the south of Assyria. Then we turn southwest, down to Damascus, on the King’s road, through the Decapolis, across the ford Jabbok, the Jordan river and then up to Jerusalem1. With our large caravan, we move slowly, about 12 to 15 miles a day.

Together with all the wise men from Babylon, Abdi-ili told Nebuchadnezzar, ‘There is not a man on earth who can meet the king’s demand, for no great and powerful king has asked such a thing of any magician or enchanter or Chaldean. The thing that the king asks is difficult, and no one can show it to the king except the gods, whose dwelling is not with flesh.’ Because of this the king became angry and furious, and commanded that all the wise men of Babylon be destroyed.

Then Daniel, of the nobility and royal family of the people of Israel, approached Arioch, the captain of the king’s guard, to see the king about the dream and its interpretation. After the appointment was made, Daniel and his three friends, Hananiah, Mishael, and Azariah, prayed to the God of heaven to reveal to them the mystery of the dream and the interpretation — so that Daniel and his companions might not be destroyed with the rest of the wise men of Babylon. Then God revealed the mystery to Daniel in a vision of the night. After blessing and worshipping the God of heaven, Daniel revealed not only Nebuchadnezzar’s dream, but also its interpretation. So, Daniel saved my ancestor Abdi-ili’s from certain death, and not only his, but all the other wise men from Babylon’s lives as well.

After kicking against the goads for quite some time, Daniel’s life of faith finally convinced my great-great-great-great-great-grandfather that the worship of stars, moons, planets and constellations is nothing more than idolatry. Then Abdi-ili worshiped the God of Israel. His son Shukura3 also became a believer — and their children, too, and throughout all generations, our family worship the God of Israel, the Most High. ‘And now I, Melchior, am traveling to Jerusalem with other wise men of Mesopotamia4. Behold, we have seen the star of the King of the Jews!’

At first Balthasar, Gaspar and some of the others were hesitant to come along. ‘How do you know, Melchior,’ Gaspar asked, ‘that this star has anything to do with a Jewish king? Even if it did, why do you specifically want to worship this king? Which wise man of the East has ever worshiped any Jewish king, so why this one, and why now?’

‘Do you not remember the prophecy that the prophet Daniel received near the end of his life?’ I asked. I began to explain to him: ‘Seventy sevens have been decreed over Daniel’s people and Jerusalem. From the command to restore and build Jerusalem to the coming of an anointed one, a prince, there shall be a total of 69 sevens, or 483 years. The command to rebuild Jerusalem has long ago been granted by Artaxerxes and the prophecy is that the Anointed One will be cut off, and shall have nothing. Count down the years and know, this Anointed must appear, any day now!’5

“Do you think the Jews are expecting their Messiah?”, Balthasar asked.

‘Surely there will be a man in Israel who is righteous and devout, waiting for the consolation of Israel, someone on whom the Holy Spirit is. Surely there will be a woman in Israel, who worships God with fasting and prayers, night and day, waiting for the redemption of Jerusalem.6 Let us go to Jerusalem in faith. Abram left Ur of the Chaldeans to go to a land, let us do the same!’

‘I understand the prophecy of the seventy sevens, Melchior, and can connect it to the Anointed, but what does that have to do with this unusual star?’ Gaspar asked.

‘Did you forget that there are treasures in Scripture, even in history? Which prophet is from Mesopotamia?’, I asked.7

“Here in Pethor, close to the Euphrates?’, Balthasar suddenly exclaimed! ‘You mean the one whose donkey spoke, and even scolded him?’8

‘Yes, I am referring to Balaam, the son of Beor’ I answered. ‘Balaam had to curse the Israelites so that they could be defeated and be driven from the land of Moab. For his trouble, Balak, the king of Moab, would pay Balaam a fee. However, the angel of the LORD told Balaam, “speak only the word that I tell you”. As part of a series of prophecies, Balaam said, “I see him, but not now; I behold him, but not near: a star shall come out of Jacob, and a scepter shall rise out of Israel”. This star that we see is the star of Jacob, the star of the Anointed, the King of the Jews!’9

Two weeks later our journey began, and now, sometime later, we are close to Jerusalem.

‘It is good and proper that we bring gold and frankincense to the King of the Jews,’ Gaspar remarked, ‘but why are we also bringing Him myrrh?’10

‘I’m also not sure about the myrrh, Gaspar,’ Balthasar replied, ‘but presumably it has to do with Daniel’s prophecy about the Anointed One who will be cut off. Even so, I don’t understand everything, yet I believe the gift is appropriate.’

When we arrived at Mount Scopus, overlooking the Mount of Olives, I interrupted the conversation: ‘Look! The city of the great King!’. In Jerusalem we asked: ‘Where is he who has been born king of the Jews? For we saw his star when it rose and have come to worship him.’

To our utmost surprise, we did not immediately receive an answer. We asked pedestrians, traders and anyone who looked like a government official, but without success.11

Shortly afterwards, someone secretly called Balthasar aside, saying: ‘Come with me, you and your companions, for king Herod is calling for you.’

When we arrived, Herod asked, ‘When did you notice the star’s appearance? How long ago did this happen?’12

Balthasar replied, ‘From the time we saw the star plus the time to prepare for the trip plus our travel time from the East until now.’

Herod said, ‘I am sending you to Bethlehem in Judea. Go and search diligently for the Child, and when you have found him, bring me word, that I too may come and worship him.’13

As we were leaving, I asked my companions, ‘How far is Bethlehem in Judea from here?’

‘You’d think the Jewish religious leaders would join us’, I wondered out loud.

We had barely left, when we became dumbfounded with surprise. We rejoiced exceedingly with great joy, ‘Look, the star! The star goes before us!’

Balthasar mused, ‘Is the star of the King of the Jews perhaps his Shekinah-glory?’14

From Jerusalem to Bethlehem, yes even into the village, the star guided us until it stood above the place where the Child was.15 The journey was long and wearisome, but worth it. In the house we saw the Child, fell down and worshipped Him. Gaspar opened our treasures. We gave Jesus gifts of gold, frankincense and myrrh.16

That night our hearts rejoiced, our faces shone bright and our dreams were busy. In a dream, Balthasar received a divine warning not to return to Herod, so we took another road back. We first travelled south, past Hebron, the Dead Sea, Ein Gedi and then eastward over the mountains onto the King’s Road. At the rock and water of Petra, we rested, preparing ourselves for our journey through the desert. We look up and see, as everyone else can see too, the heavens which declare the glory of God, the works of His hands. Human history began thousands of years ago, and we have always been waiting for the ‘Seed of the woman’, and for the star of the Anointed King of the Jews. Our hearts rejoice and our faces shine, for even though all things are not yet in subjection to his sceptre, we see Him, JESUS.