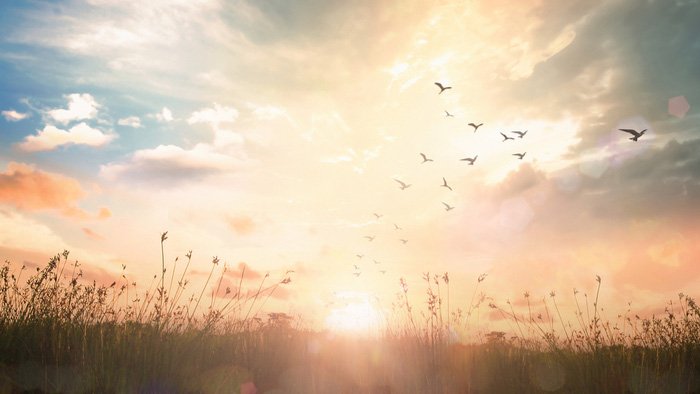 Until the Day Dawns

Typology does not establish teaching but beautifies it. Christ’s second coming and the beginning of his kingdom can typologically be associated with “dawn”, “morning”, “light” and the sun.

The Eschatological Day of the Lord

During Christ’s first advent, Jesus declared, ‘As long as I am in the world, I am the light of the world’ (Jn 9:5). Christ said, ‘We must work the works of him who sent me while it is day; night is coming, when no one can work’ (Jn 9:4). During the First Advent, Christ defeated Satan on the cross, but the devil’s sentence has not yet been executed. The New Testament testifies that Satan is still the ‘prince of this world’ (John 12:31; 16:11), the ‘god of this age’ (2 Cor 4:4) and the ‘prince of the power of the air’ (Eph 2:2). The world system under Satan is getting darker, lawlessness is increasing, and people are lost. The present dispensation is evil (cf. Gal 1:4); it is, typologically speaking, still night. ‘The night is far gone; the day is at hand. So then let us cast off the works of darkness and put on the armour of light’ (Rom 13:12). If it is so dark, till when should believers heed God’s prophetic word?

The Church and the Coming Kingdom

The apostle Peter calls believers to heed the prophetic word: ‘And we have the prophetic word more fully confirmed, to which you will do well to pay attention as to a lamp shining in a dark place, until the day dawns and the morning star rises in your hearts’ (2 Pet 1:19; cf. Ps 119:105). In this context, the prophetic word refers to Christ and His coming kingdom (2 Pet 1:11). During Christ’s first advent, on the Mount of Transfiguration, Peter and two other apostles saw a preview of Christ coming in his kingdom (2 Pet 1:16-18). Peter emphasizes the glory, honour and majesty of the Lord Jesus Christ in the coming kingdom (2 Pet 1:16-17). This is what the Lord Jesus Christ will look like when He establishes the Messianic kingdom on earth. During Christ’s first advent, John the Baptist was a a burning and shining lamp and the people were willing to rejoice for a while in his light (cf. Jn 5:35). How much more should we rejoice in the light of the prophetic word that testifies of the glorified Lord Jesus Christ and His coming kingdom? The Son of Man will return to the earth with the same power and glory that He had with the Father before the world existed (cf. Mat 24:30b; Jn 17:5).

How may the analogy of a lamp shining in a dark place be understood? Since Christ’s ascension, the night has been almost 2000 years long and the earth is becoming an ever-darker place. Physically, the morning star, that is, the planet Venus, appears when the night is almost over, shortly before the new day breaks. According to Jewish wedding customs, the bridegroom usually fetches his bride at night, with a shout, and then takes her to be with him forever (cf. Jn 14:1-3; 1 Thess. 4: 13-18). Jesus Christ is the morning star (Rev 22:16) and shortly after He has snatched away his bride, other events related to Christ’s second advent will begin to happen. Believers are in Christ, He is the hope of glory (Col 1:27). The morning star that will rise in our hearts refers either to a greater intimacy with the Lord Jesus or receiving authority to co-reign in the Messianic kingdom.

Jacob/Israel’s Wrestled in the Night

Jacob wrestled with a Man during the night until the breaking of the day — and the sun rose upon Israel just as he passed Penuel. Jacob wrestled with the second Person of the Trinity (Gen 32:22-24, 30). God confirmed the Abrahamic covenant with Jacob (Gen 28:13-15), but Jacob wanted to obtain God’s blessings in his own way. Then the Man wrestled with Jacob, and the struggle lasted until the day broke, for the Man said, ‘Let Me go, for the day has broken. But he said, ‘I will not let you go unless you bless me’ (Gen. 32:26). Then he said, ‘You will no longer be called Jacob, but Israel; for you wrestled with God and with men, and prevailed’ (Gen. 32:28). God dislocated Jacob’s hip but Jacob paradoxically prevailed because at long last he submitted to God’s will. Israel called the place Peniel because, he said, I saw God face to face, and yet my life was spared. Just as the father of the twelve tribes of Israel wrestled with God through the night, so Israel will struggle through the night of the Tribulation Period until they realise that God’s blessings come only in and through the Messiah. At the end of the Tribulation Period, the believing remnant of Israel will acknowledge their guilt and seek God’s face, and they will ‘press on to know the LORD; his going out is sure as the dawn; he will come to us as the showers, as the spring rains that water the earth’ (cf. Hos 5:15-6:3; cf. Zech 12:10; Mat 23:39). For those Jews who fear the Name, the sun of righteousness will rise with healing in its wings (cf. Mal 4:2).

As part of his farewell address, king David said that the Messiah will rule men justly, ruling in the fear of the Lord, and that He will dawn ‘on them like the morning light, like the sun shining forth on a cloudless morning, like rain that makes grass to sprout from the earth’ (2 Sam 23:3-4; cf. also Ps 30:5; 49:14). The Father says to the Son, ‘The LORD sends forth from Zion your mighty sceptre. Rule in the midst of your enemies! Your people will offer themselves freely on the day of your power, in holy garments; from the womb of the morning, the dew of your youth will be yours’ (Ps 110:2-3). And Jesus declared, ‘I am the root and the descendant of David, the bright morning star’ (Rev 22:16). This symbolic reference to Jesus as the root and the descendant of David (cf. Isa 11:1) not only emphasises that Christ will fulfil all the covenant promises made to the house of David, but also that, as the morning star, He will shine the brightest. The King’s followers will also ‘shine like the brightness of the sky above, and those who turn many to righteousness, like the stars forever and ever’ (Dan 12:3) — yes, then ‘the righteous will shine like the sun in the kingdom of their Father’ (Mat 13:43).

Pay attention to the prophetic word as to a lamp shining in a dark place, until the day dawns and the morning star rises in your hearts.