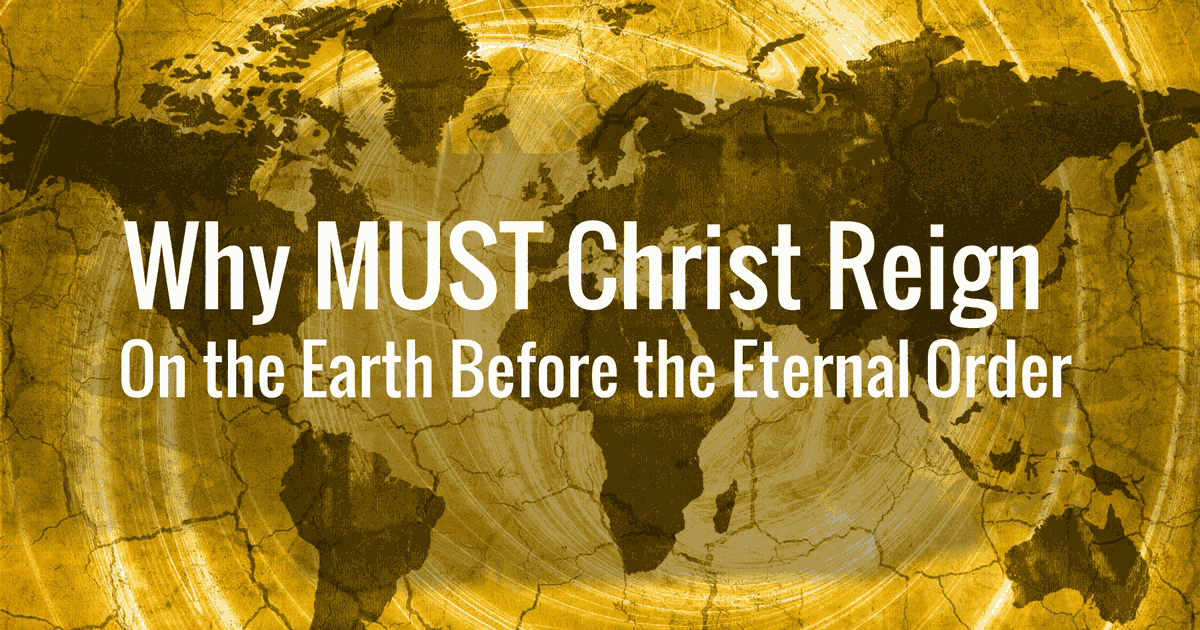 Why MUST Christ Reign On the Earth Before the Eternal Order?

Why does 1 Corinthians 15:25 state that Christ “must” reign until He put all his enemies under his feet? In the very next verse, God says that the last enemy to be destroyed is death. Will there be death in the eternal order? When will unfulfilled and unconditional covenantal promises be fulfilled? Is Christ now ‘spiritually’ ruling as King over the earth or will He physically return and then rule from Jerusalem? We provide reasons why Christ must reign over the earth before the eternal order will commence.

It is abundantly clear from Scripture that God the Creator intended man to rule over the earth. We see this in the very first chapter of the Bible (Gen 1:28), David refers to that mandate (Ps 8) and so does the writer of Hebrews (Heb 2:5-8). It is God’s plan that someone with a human nature rule as a viceroy over one part of God’s creation, namely the earth (cf. Mat 25:31, 34). If God’s plan could be thwarted in any way by fallen angelic beings or fallen humankind, then God’s sovereignty and glory would be tarnished by the very creatures that God created. But perish the thought, this will never be! God gave Adam the authority to rule over the earth as God’s representative, but Adam fell when he obeyed Satan. Since then, Satan is the god of this world (cf. Luke 4:8-9; 2 Cor 4:4) because Satan has temporarily usurped mankind’s appointed rule over the earth. Even though Satan has already been defeated at the cross, his sentence has not been executed yet. But when Christ returns, not only will Satan be bound (Rev 20:2-3), but the God-man, the Last Adam, will successfully rule over the earth just as God had always intended it to be (cf. Ps 2; 1 Cor 15:24-28). Moreover, Christ must reign over the earth so that God’s glory be seen in time and in history in the very place where the first Adam rebelled, i.e. on planet earth. God’s kingdom will come, and His will shall be done, not only in heaven, but also on the earth (cf. Mat 6:10).

2. Vindication and Reward of Christ and of His Disciples

In the same realm where they were once persecuted, Christ and his followers must eventually be vindicated and rewarded. Christ has been glorified through his burial in a rich man’s grave, his resurrection and glorified body, his ascension and present session at the right hand of the Father. But while most of this is now occurring in heaven, Christ is worshipped and honoured on earth only by his followers. On the earth, not one nation bows the knee before Christ, in fact, far from serving the Lord with fear, the rulers of the earth are instead taking counsel together against the LORD and against his Anointed (cf. Ps 2:2, 11). But God the Father will give the nations as Christ’s inheritance (Ps 2:8). As the Last Adam, Christ will successfully rule over the earth with a rod of iron, but Christ’s overcomers will likewise be rewarded and vindicated in the same realm where they too were once reviled and persecuted (cf. Rev 2-3).

3. Fulfilment of Unconditional Promises and Prophecies

Abrahamic, Land, Davidic and New Covenant Promises
Various unfulfilled covenant promises must be fulfilled during the Millennium. At a certain stage in the future Tribulation Period, Israel will as a nation be saved and enter into the New covenant (Jer 31:31-37; Isa 59:20-21; Rom 11:25-27). They will also be brought into the land that God had unconditionally given to Abraham (cf. Gen 15:18-21). When Christ returns to the earth, He will sit on “His glorious throne” (Mat 19:28; 25:31), which is the Davidic throne. The Son of David will rule from this Davidic throne in Jerusalem over Israel and the nations.

Zechariah 14:16-21 says that all those left out of all the nations who rose against Jerusalem, will gather to worship the King, the LORD of hosts, and to celebrate the Feast of Tabernacles. This prophecy was not fulfilled in the time of Zechariah after the Babylonian captivity; it was not fulfilled during Jesus’s first coming, and it is obviously not being fulfilled today. Zechariah 14:17-19 furthermore speaks of the disobedience and punishment of certain nations. Since there is no more sin in the eternal state, Zechariah 14:16-21 refers to an ‘interim period’, the messianic kingdom.

A similar argument can be made for Isaiah 65:17-25: even if there is a new heaven and a new earth, in this passage there is still sin and death (v. 20) and this period therefore also refers to the messianic kingdom that will merge into the eternal state. The Old Testament does not say how long the messianic kingdom will continue before it will merge with the eternal state, but the New Testament says this ‘interim period’ will be 1 000 years (Rev 20:1–7).